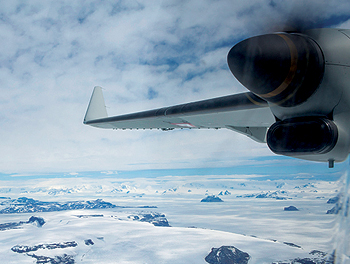 An Airbus C295W aircraft belonging to the Mexican Navy (SEMAR) and operated by a mixed crew from Airbus Defence and Space and SEMAR flew from Río Gallegos Airport in Argentina to the Marambio Base, the first flight ever by a C295 to Antarctica.

The C295W landed in Marambio at 11.45 on 27 November, returning to Río Gallegos nearly eight hours later. The Argentinian Marambio Base, in the Seymour Island in the North of Antarctica, frequently suffers temperatures below -30oC with extremely strong winds.

The flight was further proof of the outstanding versatility of the C295W, which in recent weeks has been subjected to the most diverse weather conditions. Before reaching Antarctica, the aircraft performed flights from El Alto Airport in La Paz, Bolivia, at an altitude of more than 4,000 metres with high temperatures. The new C295W version is equipped with winglets, which allow transport of more payload over larger distances in hot and high conditions such as these, and result in fuel savings of around 4%.

During its tour of the region, the C295W has already visited Bolivia and Chile and after the phase in Argentina will continue to Paraguay and Panama before completing the tour in Mexico in early December.