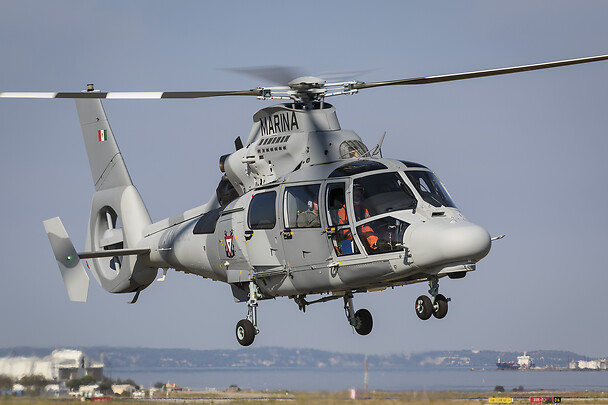 The Mexican Navy has received two final AS565 MBe Panther helicopters, completing the order of ten purchased in November 2014.

Versatile, safe and efficient. That’s how the Mexican Navy describes the MBe Panther after approximately two years of its use in various operations. Its maximum take-off weight has increased significantly from 4,300 kg to 4,500 kg. But this isn’t the only improvement: the MBe Panther also offers optimised performance in high and hot environments, and features modern avionics with a vehicle and engine multifunction display (VEMD) and sophisticated mission equipment for greater operational capabilities, allowing it to achieve a top speed of almost 280 km/h and a range of 780 kilometres. All of these qualities make this helicopter a safe and cost-efficient model for the missions it covers.

“The MBe version is a more modern helicopter with an advanced four-axis autopilot and generally improved performance and features thanks to engines that are more powerful than those of its predecessor. This is the third version of the Panther to be used by the Mexican Navy, who has been operating helicopters from this range since 2004,” explains Admiral José María García Macedo, General Coordinator of Naval Aeronautics for the Mexican Navy.

“The MBe’s capabilities can be used in both marine and land-based environments for missions like search and rescue (SAR), or to support the civil population in disaster areas or areas affected by natural catastrophes. It can also be used for cargo load jobs and as an air ambulance. In total, each Panther logs approximately 300 flight hours per year.”

The Panther helicopters will be operated at various bases in the Gulf of Mexico and on the Mexican Pacific coast. Their role will also include being stationed on logistic ships which carry out ocean patrols – Navy ships with hangers and platforms to house the Panthers – from which the helicopters respond to maritime emergencies and provide protection to oceangoing fleets.

To prepare them for a wide range of missions, the Navy’s MBe Panthers are equipped with a rescue winch with a capacity of 272 kg and a forward-looking infrared (FLIR) camera for SAR missions at night. Furthermore, they can also be equipped with up to four stretchers for medical evacuations and casualty transport, as well as with a load hook.

“The personnel of different squadrons considers this helicopter easy to fly, especially due to its technology and avionics, which facilitate operations and increase security throughout missions. We are very satisfied with the new Panther,” affirms Admiral García Macedo.