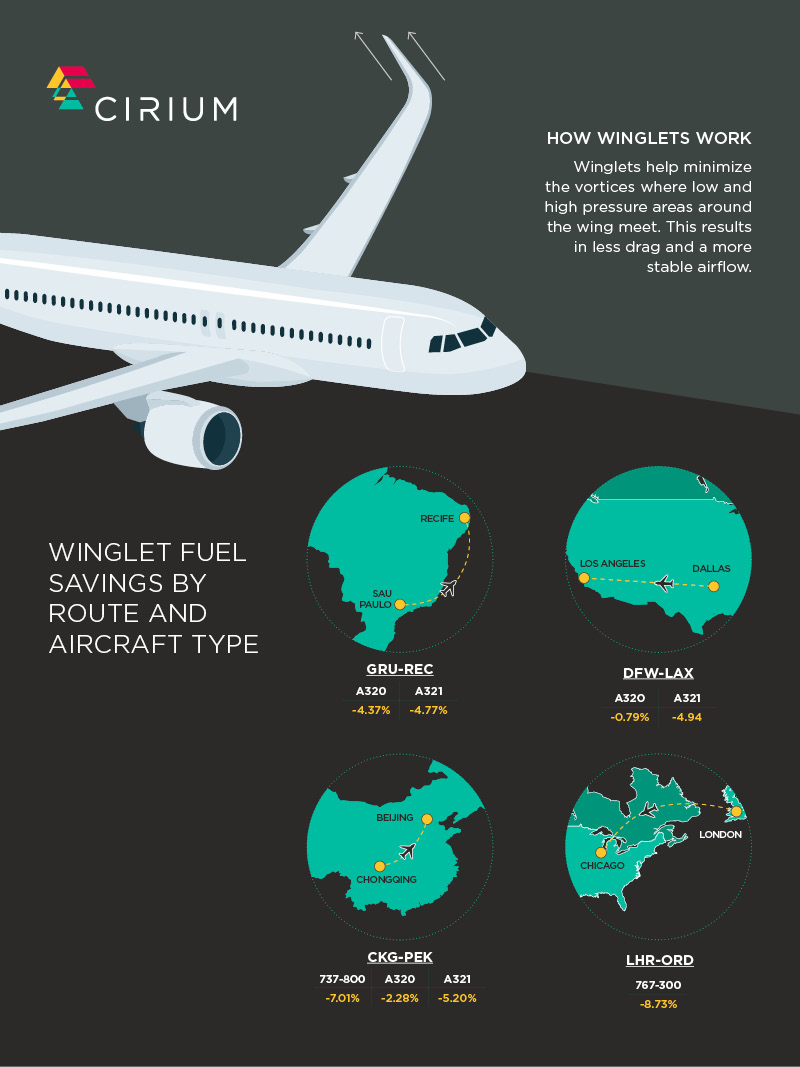 The emergence of airlines as a safer and faster mode of transport imparts the aviation industry with the impetus for rapid growth. This ever-growing sector is witnessing intensifying competition where aircraft operators are lowering the cost of travel in a bid to attract consumers. The resulting affordability is a prime factor in making air travel as the preferred mode of transport.

From changes in shape to variation in material, aircraft wings have been evolving to improve the capabilities of aircraft associated with speed and fuel. Aircraft winglets are known to significantly improve the aerodynamic performance of an aircraft which substantially reduces the fuel consumption and cost of the aircraft. Aircraft winglet has turned out to be a critical component that aids in different actions related to aircraft such as lifting, flying, turning, landing and control.

This winglets industry is consistently expanding on the back of stringent regulations regarding the replacement of aircraft parts, which keeps on generating scope for growth of aircraft winglets market. The number of commercial and regional aircraft deliveries have substantially increased, bolstering the demand for fleet expansion, thereby boosting the market for aircraft winglets.

However, there are certain factors associated with new aircraft that make the sale of aircraft winglets sluggish. To start with, new aircraft come with a warranty of about five years. This warranty includes almost all the aircraft parts such as avionics, airframe, interior-exterior parts and engine, arising negligible expenditure on repair and maintenance during this period. Moreover, the probability of any maintenance issue capable of disrupting cost and operation is minimal during this period. The aforementioned factors have been slowing down the escalating sale of aircraft parts, hindering the rapid growth of the aircraft winglets ecosystem.

Aircraft engineers are progressively approaching innovations in the aircraft winglets and are deriving inspiration from the flight capacity of the bird named Albatross. Albatross as a sea bird is regarded for its remarkable flying capacity which it achieves without batting its wings. The effortless flight of this magnificent bird covering long distances is followed by unlocking of wings for better navigation and adjustment with the speed of the wind. Albatross One is one such remotely-controlled hinged wing-tips that impart strength to the wings of the aircraft. These winglets generate very less load as compared to the conventional aircraft wings, to the fuselage during turbulence. The capability of the wingtips to flex with wind gusts has actuated this milestone into reality.

With the eagerness to reduce the emission of greenhouse gases, the stakeholders are focused to design aircraft winglets with novel design and morphing mechanisms that facilitate less fuel consumption. Engineers from the National Aeronautics and Space Administration (NASA) and researchers from Massachusetts Institute of Technology (MIT) are collaborating to come up with smart wings for aircraft that can make alterations in shape to control the flight of the aircraft. This wing is flexible to achieve optimization at every stage of flight to boost the performance of the aircraft. Transonic Truss-Braced Wing is next in the line of innovative development. It based on a concept that promises to reduce the fuel burn by half of what was burnt by the conventional aircraft.

North America Along With Europe Gains Prominence in the Market

The latest report from Persistence Market Research provides a detailed overview of the parent market. It further gives a comprehensive analysis of the changing market dynamics along with in-depth market segmentation. It thoroughly covers the competitive landscape of the aircraft winglets market, highlighting the strategies of the key players and different products offered by them. The report provides insight into niche segments and their growth projection for the coming years.