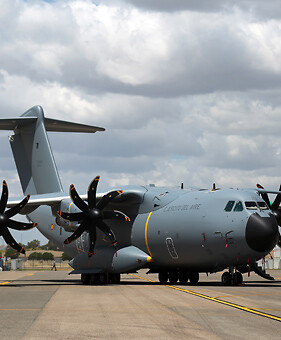 The first Airbus A400M destined for the Spanish Air Force has finished its painting process and appeared in the colours of the customer.

The aircraft, production number MSN44, left the paintshop at the final assembly line (FAL) in Seville and will now undergo ground tests in preparation for its first flight in mid-July.

The A400M was launched in May 2003 to respond to the combined needs of seven European Nations regrouped within OCCAR (Belgium, France, Germany, Luxemburg, Spain, Turkey and the UK), with Malaysia joining in 2005.

The first production aircraft was delivered to the French Air Force in August 2013 and in service a year after.

The A400M already has seen operational use with the French and Turkish Air Forces in Afghanistan, the Central African Republic, African’ Sahel Region, Mali and in the Middle East to support the air operations over Iraq and Syria.