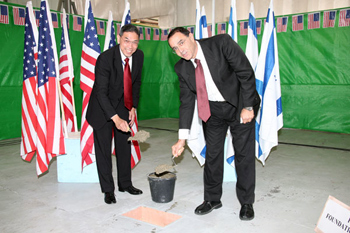 IAI will begin delivering the F-35 wings in 2015. The contract’s duration is for about 10-15 years, with potential sales reaching $2.5 billion.

The contract marks a key milestone in the existing F-35 cooperation between IAI and Lockheed Martin. Both companies recently began assembling an F-35 wing production line, with IAI investing in the required advanced systems and technologies.

Joseph Weiss, President and CEO of IAI, said: “This agreement represents an important milestone for IAI and ensures its involvement in the world’s most advanced fighter aircraft. I welcome the strengthening relationship with Lockheed Martin, a leading manufacturer of aircraft.”

“This agreement is another important milestone in the long standing partnership we have with Israel Aerospace Industries,” said Steve O’Bryan, Vice President of F-35 Program Integration and Business Development, Lockheed Martin Aeronautics. “IAI has been supplying Lockheed Martin with essential components for our platforms for many years and their participation in the F-35 program is a natural development of this relationship.”