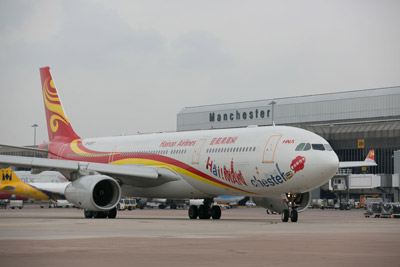 Manchester Airport has welcomed news of a “landmark agreement” to allow more direct services between the UK and China.

The Department of Transport has announced there will be 50% increase in the number of permitted weekly flights, from 100 to 150.

And the creation of extra capacity is aimed at stimulating direct connectivity to and from airports outside of London, which the DfT says “allows for a huge expansion in routes.”

The news comes after the report into the economic impact of Hainan Airlines’ service to Beijing revealed it had driven an uplift in trade, tourism and inward investment, as well as boosting the North’s universities.

– UK export values from Manchester Airport have increased 265% to £200m per month since the Hainan Airlines service started;

– A visitor spend of £140m, which is more than double the value expected prior to the launch;

– 40% more people in the North are now travelling to China than prior to the commencement of the route;

– Passenger volumes are 15% higher than predicted;

– International student numbers at Manchester University have grown at twice the national average.

The report was also launched in China by a ministerial delegation from the UK Government in Shanghai to promote trade and investment opportunities in the Northern Powerhouse.

Manchester Airport also has a direct route to Hong Kong with Cathay Pacific, which was increased to a daily route earlier this week due to the success it has enjoyed in the three years since launching.

“Our connections to both Beijing and Hong Kong have led to significantly higher volumes of exports and inward investment, while the North’s universities have benefited from increased international student numbers and research collaborations with Chinese institutions.

“Importantly, the routes have stimulated brand new demand for travel between the UK and China, which among other things has delivered a huge boost to the visitor economy across the North.”

The announcement builds on successful discussions in October 2016 that saw limits on passenger flights between the two countries raised from 40 per week to a maximum of 100.

The number of Chinese tourists visiting the UK has rocketed during the first half of this year. Between January and June, 115,000 visits were made from China to the UK, a rise of 47% on the same period last year. Spending also increased to £231 million, up 54%.

“These agreements are an important part of preparing Britain for a post-Brexit world and making sure we have access to key markets in the Far East, and they come at a time when our exports are growing and we continue to attract international investment. It just underlines that Britain will do well regardless of the outcome of the Brexit negotiations.

“The whole government is working to secure the best possible future relationship with the EU, and great progress has been made this week, but no one should believe that Britain’s future success depends on decisions taken in Brussels.”

“It is clear that direct connectivity to high growth markets like China is key to the success of the Northern Powerhouse vision and the creation of a balanced UK economy.

“The services from Manchester to Hong Kong and Beijing have already delivered wide-ranging economic and social benefits and further strengthened relations between the North and China.

“As highlighted earlier this week during the UK-China People to People Dialogue, delivering enhanced connectivity outside of our capital cities will be critical in driving growth and engagement with key growth markets in a post-Brexit era. This UK-China bilateral agreement paves the way for new direct services between the North and other Chinese cities to be established, which will help deliver even greater volumes of trade, tourism and investment.”

Manchester Airport continues to speak with airlines about the launch of new services to additional Chinese cities.