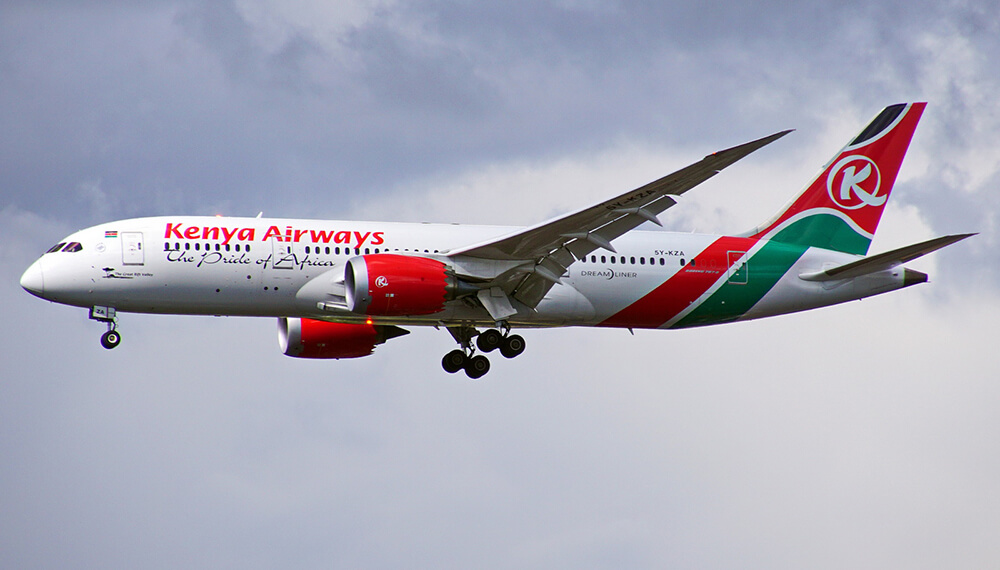 Kenya Airways has recorded a 12.2% increase in revenue for the six months period ended June 30, 2019, attributed to the positive performance of recently introduced routes, in line with the airline’s network expansion strategy.

Revenue for the first half increased to Kshs. 58.55 billion from Kshs. 52.19 billion compared to the same period last year.

During an investor briefing, Kenya Airways board and management conveyed optimism that the strategic investment initiatives the airline has been implementing for the past two years are progressively paying off.

“We continue to steer the business away from the previous headwinds, steadily digging it out of the historic loss of Ksh. 25 billion posted in 2014. As at the end of 2018, the losses had narrowed by over 250%. This is a testament of our commitment to turnaround Kenya Airways”.

Investment in new strategic routes such as New York, Mauritius, Libreville, Mogadishu, Rome, Geneva and Malindi delivered a 6.6% increase in passenger numbers during the period to hit 2.4 million. This boosted passenger revenues by 5.9% to Kshs. 42.60 billion.

During the period, the Nairobi-based airline brought back two Boeing 787 aircraft to its operating fleet that had been previously sub-leased to Oman Air to support the new routes.

“The two wide-body aircraft were brought back to support operations in the new long-haul routes and their costs are now fully borne by Kenya Airways. As the new operations continue, we will see further positive returns from the enhanced fleet,” said Sebastian Mikosz, Kenya Airways Group CEO and Managing Director during the briefing.

“The Nairobi-New York route which was launched in October 2018 has exceeded expectation and continues to record positive passenger uptake. We expect improved revenue from all our key routes in the second half of the year based on the forward bookings which show an improvement from the previous year,” Mr. Mikosz added.

The CEO added that the airline’s strategic network expansion is still going on with the airline having recently secured codes to fly to Canada and Beijing.

Expenses of opening new routes saw direct operating costs go up by 5.3%, from KShs. 21.99 billion to Kshs.23.19 billion. The return of the two wide-bodies also increased fleet costs and a reduction in the previously collected lease fees.

Despite the increased flight frequency, the group maintained low fuel costs through its hedging program combined with favourable global fuel prices. The fuel costs during the six months stood at Kshs.15.70 billion, a marginal 5.1% increase from Kshs. 14.95 billion incurred during the same period last year.

Kenya Airways recorded an impressive 45.2% growth in income from ancillary and other revenues that includes Maintenance, Repair and Overhaul (MRO) which rose to Kshs.10.65 billion from Kshs. 7.34 billion recorded in the same period last year. Revenue from cargo improved to Kshs. 4.22 billion.

Given the investments in new routes, the return of the two wide–body aircraft and other operating costs, the Group posted a loss before tax of Kshs. 8.56 billion.

“Despite the tough market environment, we are making positive strides which involve resource optimization and the robust growth approach we have taken in this very competitive marketplace. Some of these investments may deny us, our shareholders and stakeholders the coveted bottom–line numbers, but we have our eyes on the bigger picture,” Chairman, Michael Joseph added.