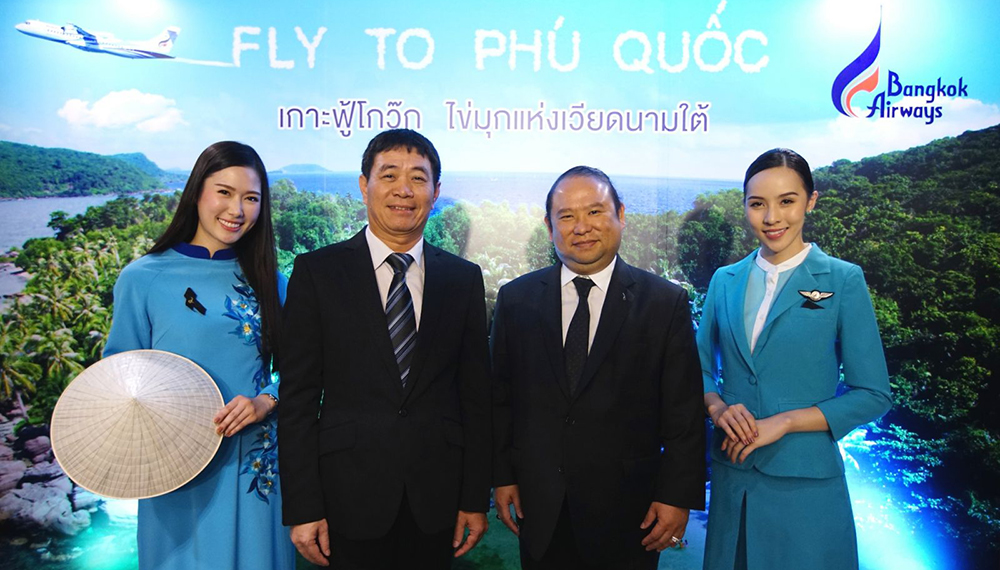 The event was held at the Blue Ribbon Club Lounge of Bangkok Airways, Suvarnabhumi Airport and attended by many distinguished guests including H.E. Mr. Nguyen Hai Ban, Ambassador of Socialist Republic of Vietnam to the Kingdom of Thailand.

“Located in the Gulf of Thailand, the beautiful Phu Quoc – known as Pearl Island, is Vietnam’s largest island. Phu Quoc has recently been appointed as a Special Economic Zone by the Vietnamese Government with the expected annual economic growth up to 25–30%. According to the latest statistics, in 2016 Phu Quoc has attracted over 1.45 million tourists all over the world. With the 30-day visa-free policy for foreigners, hence, Phu Quoc now is one of the most popular tourist destinations in South East Asia for European travelers, especially Germany, England, France, Switzerland and Russia.”

“Bangkok Airways is pleased to offer this new service to Phu Quoc as we consider this to be another milestone for us as this will make Bangkok Airways the only scheduled airline to fly to Phu Quoc from Thailand. The aim of this new launch is not only to enhance Bangkok Airways’ network to cover the Indochina region but also to provide better flight connections for European, Thai and Vietnamese customers as well as offering regional connecting routes to Phu Quoc Island for its long-haul codeshare partners. We anticipate that the majority of our passengers will be businessmen and tourists from the two countries. Moreover, having a link to this beautiful island of Southern Vietnam will make it easier for our passengers traveling aboard our code-share-partner airlines from around the world to connect to Phu Quoc and other major gateways of Vietnam such as Danang, Hanoi and Ho Vhi Minh City.”