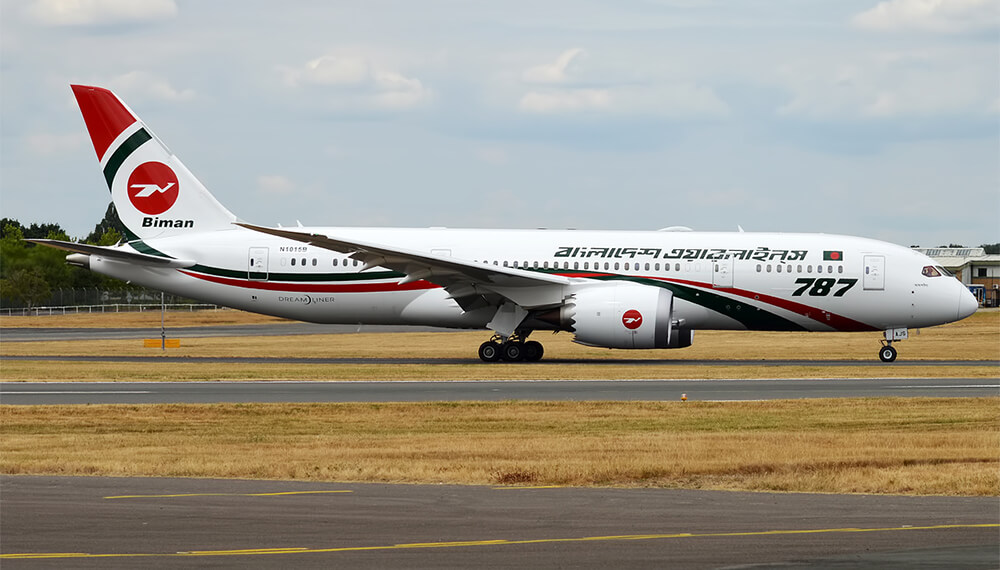 Biman Bangladesh Airlines announced its return to Manchester Airport, with a new service to Sylhet and Dhaka set to start in the New Year.

The national flag carrier of Bangladesh today announced its return to Manchester Airport, with a new service to Sylhet and Dhaka set to start in the New Year.

Biman Bangladesh Airlines will fly three times a week from the UK’s northern hub to the Bangladeshi capital and Sylhet, one of the two world’s biggest cities.

The news was announced at a special event at the British High Commission in Dhaka, attended by the Chairman- Biman Bangladesh Board of Directors, Manchester airport CEO Andrew Cowan and Greater Manchester Mayor Andy Burnham, who is leading a 10 day-long delegation to Bangladesh and India.

Biman will use a Boeing 787 Dreamliner on the route, which will start on January 4, 2020, and will operate via the eastern Bangladeshi city of Sylhet on its return from Manchester.

“We have known for some time there is significant demand for a direct service to Bangladesh and so we are delighted to be confirming this news today.

“We have known for some time there is significant demand for a direct service to Bangladesh and so we are delighted to be confirming this news today.

“Manchester Airport is the UK’s gateway to the north of England and within our catchment area there are many long-standing Bangladeshi communities for whom this will make a massive difference.

“We know there are many northern companies with a desire to trade in Bangladesh, while we also look forward to welcoming business and leisure visitors from that part of the world.

“This long haul route is the latest we have added to Manchester in recent years, as we continue to work hard to connect the north to key international destinations.”

The announcement marks a return to Manchester for Biman, which operated a Dhaka-Manchester-New York service until 2012.

It is the first deal to be revealed as part of a visit to Bangladesh and India by a delegation spearheaded by Mr Burnham.

The flight will operate on Saturday, Sunday and Tuesday taking just 10 hours. The 787 Dreamliner will have 24 seats in business class and 247 in economy class.

The Greater Manchester delegation started in Sylhet on Thursday, then moved to Dhaka will move on to Mumbai, Bangalore and Delhi.

More than 30 leaders from the world’s of academia, healthcare, business and tourism are taking April, with a series of deals and partnership expected to be made.

Delegates, including Manchester Airport, will meet with civic leaders and Government officials in each location, building on the work of the Manchester India Partnership (MIP), which is chaired by Mr Cowan.

Coun Abdul Jabbar, deputy leader of Oldham Council, who is also part of the delegation, said:

“I am absolutely delighted that Biman Bangladesh will be operating this direct flight from Manchester. It will be an extremely convenient service for the many people of Bangladeshi heritage living in the North West of England.

“I want to congratulate everyone concerned, especially Manchester Airport for adding this excellent service to its route network. Biman Bangladesh can be assured we will do all we can to support the route and ensure it goes from strength to strength.”

Onboard services on the Biman 787 will include a selection of inflight entertainment with a range of movies, TV, music and games. Plus, Biman has designed a range of menus to reflect the fresh, innovative cuisine of Bangladeshi culture with a western flare.

The airline provides international passenger and cargo services to Asia and Europe, as well as major domestic routes inside Bangladesh. It has air service agreements with 42 countries and currently flies to 16 different countries.