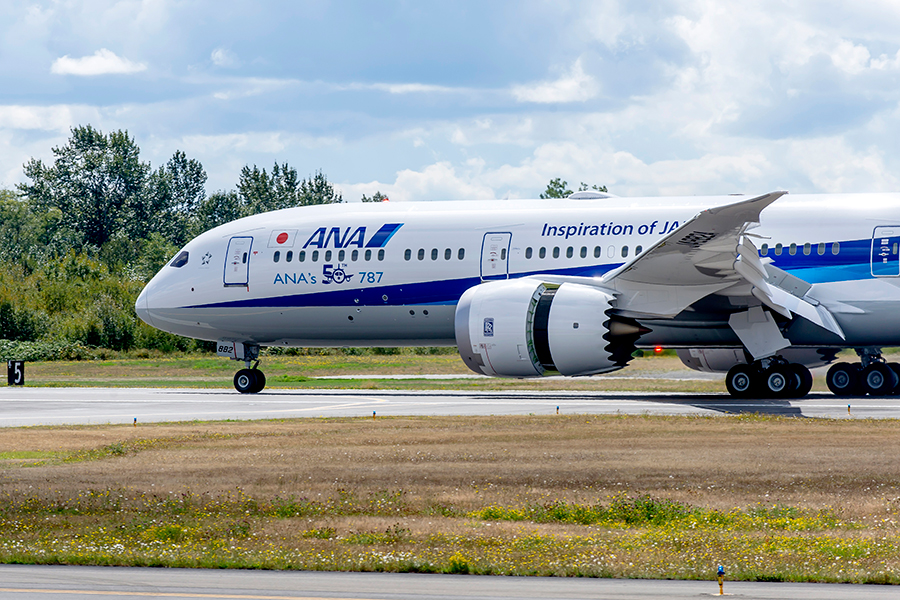 Boeing and ANA celebrated the delivery of the airline’s 50th 787 Dreamliner during a ceremony today at Boeing’s Everett Delivery Center.

Boeing and ANA (All Nippon Airways) celebrated the delivery of the airline’s 50th 787 Dreamliner during a ceremony today at Boeing’s Everett Delivery Center.

The milestone marks yet another record for ANA as it becomes the world’s first airline to operate 50 787 Dreamliners.

“The 787 Dreamliner has played a significant role in opening up new routes into new markets, while also forming the backbone of our long-haul fleet,” said Osamu Shinobe, president and CEO, ANA.

“As the launch customer of the 787 Dreamliner family, we are proud to welcome the 50th 787 Dreamliner into our fleet, where it will continue to serve our passengers with the most innovative and memorable flying experience.”

As part of efforts to expand its global network, ANA also announced plans to launch new routes from Tokyo, Narita to Phnom Penh, Cambodia in September this year and Mexico City, Mexico in February next year using 787 Dreamliners.

ANA became the launch customer of the 787 when it purchased 50 in 2004, and was the first to bring the airplane into service in 2011. The airline operates more than 11 percent of all 787s around the world today and has flown an estimated 125,000 flights with the Dreamliner.

“As the launch customer of the 787 and our largest 787 customer, we are honored to celebrate this important milestone with ANA,” said Boeing Commercial Airplanes President and CEO Ray Conner. “ANA is a valued Boeing customer and has been a vital partner on this program. Today’s event demonstrates the strength of our enduring relationship and we look forward to introducing the 787-10 to ANA in the coming years to complete the entire family of 787 Dreamliners in their fleet.”

Already the world’s largest Dreamliner operator, ANA has an additional 33 787s on order, including the longest and newest member of the family, the 787-10. The airline also has 20 777-9 airplanes on order.

ANA recently showcased its 50th 787 Dreamliner at the Farnborough International Airshow, performing high-performance demonstration flights for thousands in attendance and wowing millions of fans around the world on the internet.

The Boeing 787 Dreamliner is an all-new, super-efficient family of airplanes that brings the speed and range of big jets to the middle of the market. Boeing designed the 787 family with superior efficiency, allowing airlines to open new routes profitably and fly directly where passengers wish in exceptional comfort.

Since entering service in 2011, the 787 has flown more than 109 million passengers on more than 500 routes around the world, including more than 120 new nonstop routes made possible through its efficiency.