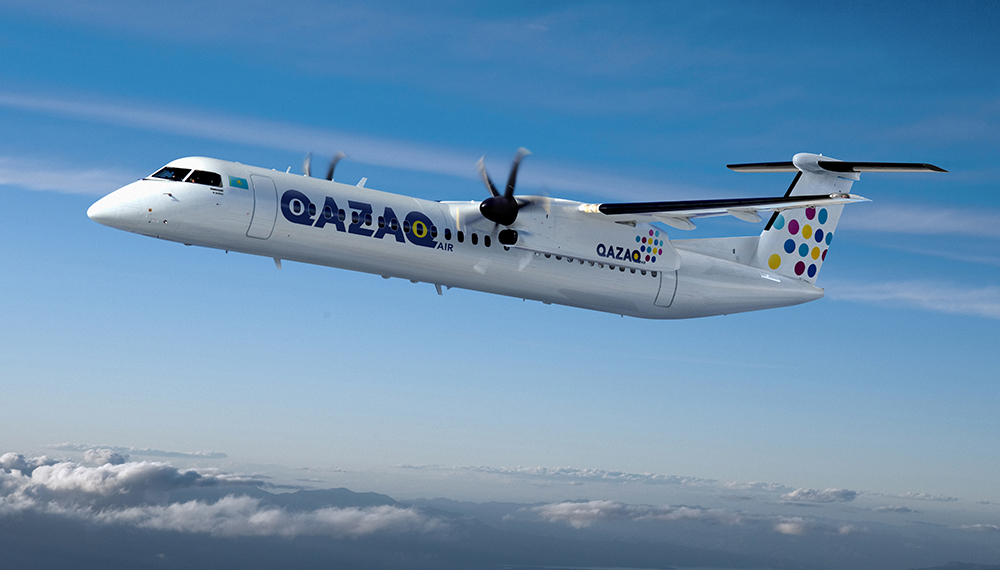 Based on the list price of the Q400 aircraft, the firm order is valued at approximately $66.8 million US.

“We are delighted that Qazaq Air will continue to grow its fleet with the Q400 aircraft,” said Ryan DeBrusk, Vice President, Sales, Europe, Russia and CIS at Bombardier Commercial Aircraft.

“Since the inauguration of Qazaq Air services within Kazakhstan in 2015, the Q400 has continued to prove itself in their operations and we are excited by this further endorsement of the Q400s superior operating characteristics.”

“We are pleased with the agreements reached on the acquisition of these new aircraft with Bombardier, with whom we have been in partnership since we started the airline,” said Blair Treherne Pollock, CEO of Qazaq Air.

“It is thanks to the Q400 aircraft, which Qazaq Air has been operating successfully since 2015, that it is now possible for us to fly our passengers to 15 destinations in Kazakhstan. To date, we have flown more than 420,000 passengers, has shown a 50% increase in passenger traffic in 2017 compared to last year. Adding two new aircraft to our fleet will not only allow us to expand our route network inside the Republic of Kazakhstan but also to start new flights beyond it, covering nearby cities in the Central Asian region.”

Qazaq Air is a young, dynamically growing regional airline in Kazakhstan, 100 % of which is owned by “Samruk-Kazyna” Sovereign Welfare Fund. Their fleet currently consists of three new Bombardier Q400 aircraft.