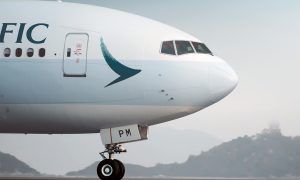 Cathay Pacific Airways announced that it will discontinue its thrice-weekly service between Hong Kong and Moscow with effect from 1 June 2015.

Alternative arrangements will be made for passengers already booked on Cathay Pacific flights to and from Moscow after that date.

The airline explained that the Moscow service is being discontinued for commercial reasons. High operating costs have made it difficult to operate profitably on the route while the number of passengers travelling between Hong Kong and Russia has been declining.

The airline will maintain a presence in Moscow to coordinate sales activities for flights through its other gateways in Western Europe, the Middle East and Asia.

Connectivity with Moscow and other points in Russia will be maintained through oneworld partner S7 and other oneworld member airlines.

Cathay Pacific remains committed to serving Europe and will continue to identify opportunities to strengthen its services to and from the continent. The airline added Manchester to its network in December 2014 and is scheduled to launch new services to Zurich and Düsseldorf on 29 March and 1 September 2015, respectively.