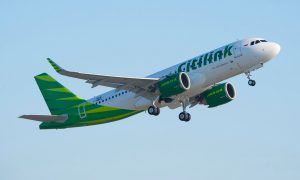 Citilink, the low-cost subsidiary of Garuda Indonesia has placed a firm order with Airbus for 25 A320neo.

The contract, signed in December 2012, represents the first direct purchase by Citilink from Airbus. It follows an order placed in 2011 by Garuda Indonesia for 15 A320ceo and 10 A320neo aircraft for operation by Citilink.

Citilink already operates a fleet of 12 leased A320s on its fast-growing domestic network.

“The A320 has played a key role in the recent success of Citilink,” said Mr. Arif Wibowo, Chief Executive Officer of Citilink. “The low operating costs, fast turnaround times and strong passenger appeal of the A320 make it perfect for our operation and we are looking forward to the even greater efficiencies that will come with the NEO”

“We are pleased to welcome Citilink as a new customer of Airbus,” said John Leahy, Chief Operating Officer, Customers, Airbus. “The order underscores the A320 Family’s position as the preferred choice for full service and low-cost carriers worldwide, both with the current and new engine options.”

Incorporating new engines and large “Sharklet” wing tip devices, the A320neo Family will deliver fuel savings of 15 percent. The reduction in fuel burn is equivalent to 1.4 million liters of fuel – the consumption of 1,000 mid size cars, saving 3,600 tons of C02 per aircraft per year. In addition, the A320neo Family will provide a double-digit reduction in NOx emissions and reduced engine noise.

With close to 8,900 aircraft ordered and over 5,300 aircraft delivered to over 380 customers and operators worldwide, the A320 Family is the world’s best-selling single-aisle aircraft family.