Cargolux Airlines announced that the airline has added a new direct service from Hong Kong to Columbus, Ohio, effective from 16 June. At the same time, Columbus becomes the latest airport in the network to be served with Cargolux’s new 747-8 freighters. Cargolux will operate two weekly flights on the route. Cargolux was able to … Read more

Share Tweet Share Share Email Comments SAS Group has signed an agreement to sell 80% of its shares in Widerøe’s Flyveselskap AS to a group of investors consisting of Torghatten ASA, Fjord1 AS and Nordland Fylkeskommune. SAS will retain a 20% share in Widerøe but will have the intention to transfer full ownership of Widerøe … Read more

After a thorough selection process, International Airline Group (IAG), and British Airways have signed a Memorandum of Understanding (MoU) to buy 18 Airbus A350-1000 aircraft plus 18 options, as part of the airline’s on-going long-haul aircraft fleet renewal and modernization strategy. IAG, owner of both British Airways and Iberia, has also secured commercial terms and … Read more

The public services trade union ver.di has called a 24-hour warning strike for Monday 22 April at several of Lufthansa’s locations in Germany. In addition to the airline’s bases at Frankfurt and Munich, the Group’s locations in Hamburg, Norderstedt, Nuremberg, Cologne, Düsseldorf, Berlin, Stuttgart and Hanover will be affected by the strike action. Lufthansa’s chief … Read more 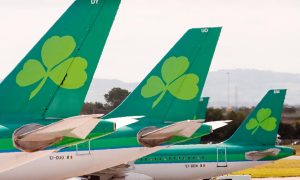 British Airways first A380 was rolled out of the Airbus paint facility in Hamburg, Germany on 5 April 2013, following the application of its full livery.

Wizz Air announced that it will start services to Dubai World Central Airport from Budapest (Hungary), Bucharest (Romania), Kiev (Ukraine) and Sofia (Bulgaria) starting from 28 October 2013. Wizz Air now connects over 30 countries with its state of the art fleet of 40 Airbus A320 aircraft. The UAE has displayed one of the most … Read more

Norwegian Air Shuttle is launching its 14th new direct route from its new base at London Gatwick. Starting May 25th, the airline will fly once a week, on Saturdays, from London Gatwick to the popular Spanish island of Ibiza. In April, Norwegian is establishing a new base of operations at London’s Gatwick Airport. The airline … Read more

Wizz Air Ukraine announced the delivery of a new Airbus А320 aircraft to its hub at Kiev (Zhuliany) Airport.