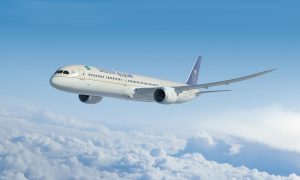 A third Dreamliner will be delivered to Saudia within the next week. The airline ordered eight 787-9s in 2010.

Saudia is no stranger to such large deliveries. In December 1999, Boeing delivered three 777s to Saudia.

“The delivery of our first Dreamliners marks yet another exciting chapter in Saudia’s long-standing relationship with Boeing that began in the early 1960s,” said His Excellency Eng. Saleh bin Nasser al-Jasser, Director-General, Saudi Arabian Airlines. “With its reputation for reliability, operational efficiency and comfort, we now look forward to the 787 becoming an integral addition to Saudia’s fleet as we continue our fleet modernization and expansion as part of our transformation plans.”

“This delivery to Saudia is an outstanding moment in a partnership that has grown phenomenally over the last several decades,” said Boeing Commercial Airplanes President and CEO Ray Conner. “Today, we are proud not only to have Saudia join our growing base of 787 customers in the Middle East, but also at the airline’s continued confidence in Boeing’s technology and airplanes over the years.”

The Boeing 787 Dreamliner is an all-new, super-efficient family of commercial airplanes that brings big-jet ranges and speed to the middle of the market. In response to airlines’ overwhelming preference, Boeing designed the 787 family with superior efficiency, which allows airlines to profitably open new routes to fly people directly where they’d like to go in exceptional comfort.

Since entering service in 2011, the 787 family is flying more than 350 routes and has established more than 75 new nonstop routes around the world.

More than 60 customers – including Saudia – from around the world have placed orders for more than 1,000 airplanes, making the 787 Dreamliner the fastest selling twin-aisle airplane in Boeing history.