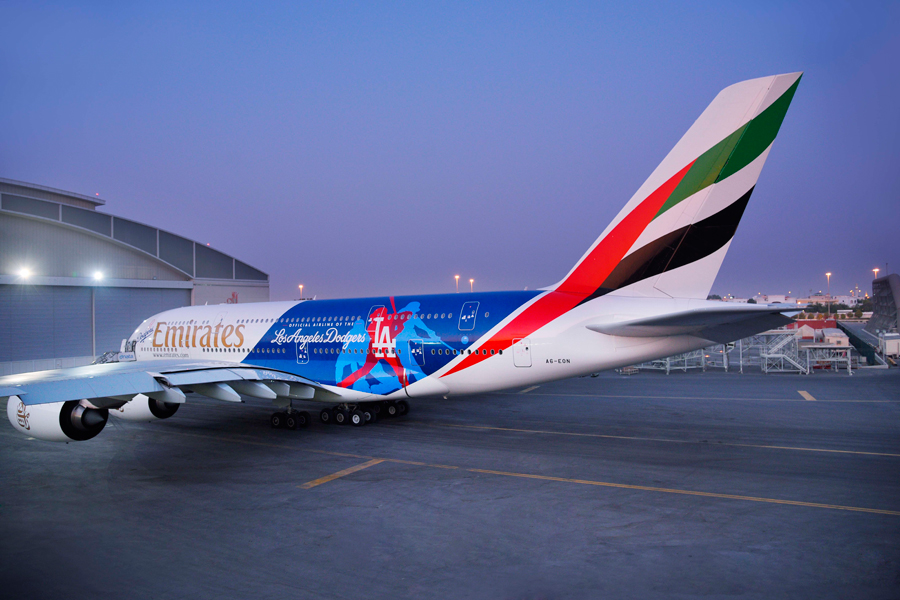 With this expanded schedule, Emirates is now able to serve nearly 1,000 passengers travelling to Los Angeles each day. Also on the same day Vienna joined the family of A380 scheduled destinations served by an Emirates A380.

The Emirates A380 aircraft was decked out in specially-designed Dodgers branding to celebrate its expanded service to Los Angeles, as well as the airline’s sponsorship of the Los Angeles Dodgers.

The new flight EK217, operated by an Airbus A380-800 aircraft, is configured for 3 cabin classes with 14 private suites in First class, 76 seats in Business class and 401 seats in Economy class.

“We’re thrilled to continue growing our footprint in Los Angeles, the second largest city in the United States, and to be able to provide more flight choices to more customers daily as well as doubling the economic benefits Emirates’ flights provide to Southern California,” said Rob Gurney Senior Vice President of Commercial Operations, The Americas. “We strive to give our customers the best possible travel experience every step of the way through our award-winning service and industry-leading products.“

In addition to serving those visiting or traveling to Los Angeles, passengers wishing to travel beyond LA to nearby destinations in the U.S. can take advantage of our partnerships with Virgin America and Alaska Airlines.  For example, through Alaska Airlines, passengers can connect from LAX to cities such as Eugene, Mammoth Lakes, Monterey, Portland, Santa Rosa, and Guadalajara. Through Virgin America, passengers can travel onwards to Las Vegas, Fort Lauderdale, Cancun and more.

The added daily flight will support the transport of even more exports from Los Angeles and the greater Southern California area, helping to stimulate the local economy and grow small businesses that would otherwise not have the option to sell into international marketplaces. Currently, aside from bellyhold capacity from its passenger services, Emirates also operates two Boeing 777-200F freighters each week to LAX.

Also on 1st July, Vienna joined the family of A380 scheduled destinations served by an Emirates A380. Emirates is the first and only airline to operate an A380 into the Austrian capital. The first ever scheduled A380 flight from Dubai to Vienna landed at 12:55 local time on Friday 1st July and was greeted by traditional water cannon salutes. Vienna is the 41st A380 destination within the Emirates global network.

Emirates currently offers double daily flights from Vienna to the international hub in Dubai. Now, the rotation EK127/EK128 is deployed by an Airbus A380 in a three-class configuration with 14 private suites in First, 76 lie-flat seats in Business and 429 spacious seats in Economy. The second daily flight (EK125/EK126) will remain being operated by a Boeing 777-300ER with a seating capacity of 360.

Emirates has served the Vienna-Dubai route since 2004 and since then has carried almost three million passengers on its double daily service.