Mr. Gregorowitsch opened the press conference by reaffirming the vision and objectives of the airline. He stated that Oman Air’s vision is “To Become the Best”, and that its objectives are to be a safe airline, to be the airline of First Choice, to make money by increasing revenues and reducing costs, to cater for growth as set out in the company’s ten-year plan, and to contribute to the development of the Sultanate.

“I am pleased to report that Oman Air has achieved important progress over the last two years and I am optimistic about the company’s future. With the invaluable support of Oman Air’s Board of Directors, we have a clear vision, achievable objectives and a set of values to which all our employees are committed. We are also delivering an ambitious and dynamic programme of fleet and network expansion. This has seen the company take delivery of outstanding new aircraft, introduce a range of exciting new destinations and launch new products and services which contribute to a seamless passenger experience.

“Despite substantial economic challenges, Oman Air is therefore in a strong position to continue its progress towards becoming a successful, sustainable company of the highest quality: in other words, To Become the Best.”

Oman Air’s fleet expansion programme has already made significant progress. With the first of the new aircraft being delivered in the last quarter of 2014, Oman Air fleet size stood at 35 aircraft by January 2015. One year later, in January 2016, the fleet had increased in size to 41 aircraft.

Oman Air has operated B737s for many years and the aircraft provide the backbone of the airline’s long and medium haul fleet. Furthermore, Oman Air was the first carrier in the Middle East region to operate the B737-900ER aircraft type.

Meanwhile, the introduction of the first of many B787 Dreamliners, initially on its Muscat to Frankfurt service, represents a step-change in the Oman Air long haul passenger experience. The aircraft offers guests more natural light, increased cabin pressure, cleaner cabin air and reduced noise. Benefits for the airline include outstanding fuel economy, reduced emissions and a lower noise footprint.

Oman Air’s fleet size stands at 45 aircraft, with at least two more B737s expected to be delivered before the end of the year, and four more B787s due for delivery over the next two years.

Mr. Gregorowitsch also described how Oman Air’s network has grown in parallel with its fleet expansion.

Recent international destinations to be added to the airline’s network include Manila, Jakarta, Singapore, Goa, Dhaka and Mashhad, Guangzhou in China will be launched on 9th December 2016. Frequencies have also been increased on many established routes, including Frankfurt, Paris, Zurich and London, whilst all Indian destinations now enjoy at least daily or double-daily services. In addition, the Omani airline will be launching direct flights to Manchester, its second destination in the UK in our Summer 2017 schedule.

“Oman Air has enjoyed a long history of working closely with commercial partners to deliver added value for our customers. The positive and productive codeshare partnerships that we have entered offer an expanded range of choices and increased convenience, and are also an excellent way of introducing more air travellers to Oman Air’s onboard products, hospitality and network.

“We have no current plans to seek membership of one of the global airline alliances, but we will be developing some exciting tactical partnerships. As a result, we will be working closely with One World; with Star Alliance members Lufthansa, United Airlines, Turkish Airlines and with SkyTeam members Kenya Airways and KLM.

“Furthermore, we remain committed to the partnerships we have successfully developed elsewhere within our business. These include our work with Cargolux, moving freight between Europe, East Africa, the Middle East and India; with freight handling specialists SATS; and with Menzies Aviation, for ground handling in Oman. In addition, Oman Air has signed agreements with service providers such as Sixt, Bank Muscat, Shangri La hotels and resorts, Rocketmiles, Al Nahdha Resort and Spa, and Muscat Duty Free, among various others that increase the mileage earnings of our FFP members.

“The accelerated fleet and network growth has required significant investment in new aircraft and landing slots”, reported Mr. Gregorowitsch. However, further major investment has also been made in many other areas of Oman Air’s operations. 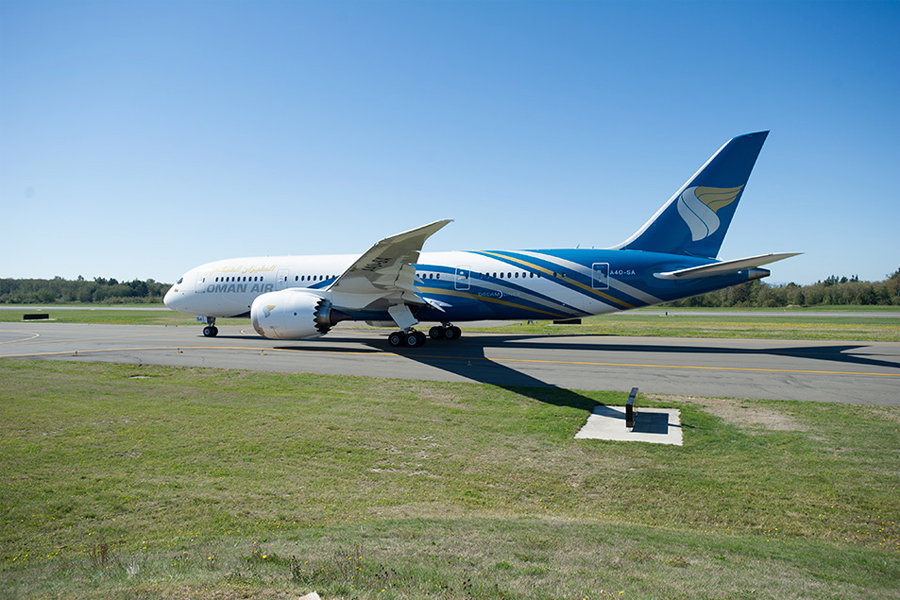 The introduction of the first B787 Dreamliners represents a step-change in the Oman Air long haul passenger experience (Photo credit: Boeing)

Such investments have been made against a challenging economic background, warned Oman Air’s CEO. Year-on-year reductions in the levels of support offered to Oman Air by the government in 2014, 2015 and 2016 are set to continue and over-capacity within the air travel market is driving prices down, leading to a cut into potential yields. Fleet and network expansion has seen a parallel expansion in the number of staff employed internationally, resulting increases in payroll and on-costs. However, an important positive outcome is that the proportion of Omani citizens employed by Oman Air has continued to grow and now stands at 64 per cent, underlining the airline’s ongoing commitment to Omanisation.

In conclusion, Paul Gregorowitsch expressed his concern regarding the existing infrastructure at Muscat Airport which is affecting the growth initiatives of the National airline. He clearly identified the need to have a second runway available as soon as the new passenger terminal is inaugurated to cater for the planned growth and ongoing contribution to the national economy.

The Chief Executive Officer’s remarks were followed by those of Chief Commercial Officer Abdulrahaman Al Busaidy. He provided details of Oman Air’s forthcoming Winter 2016/17 flight schedule, including anticipated new destinations, and offered an outline of what customers may expect of the Summer 2017 schedule.

“Having launched many attractive and extremely popular destinations over recent months, we look forward to further expanding Oman Air’s network in the course of the Winter 2016/17 and Summer 2017 schedules. Perhaps the most notable of these will be Guangzhou, our first destination in China, the operations of which will start from 9th December.

“The service will initially offer four flights per week on Monday, Wednesday, Friday and Sunday from Muscat to Guangzhou and on Sunday, Tuesday, Thursday and Saturday from Guangzhou to Muscat. Oman Air will serve customers on the new route using award winning Airbus 330-200s, configured with 196 Economy Class seats and 30 Business Class seats. As a result of our new service, we anticipate welcoming many more visitors from China to Oman. In addition, Guangzhou offers access for air leisure travellers from Oman, and from throughout our international network, to a myriad of business and leisure opportunities within South China.

“Furthermore, the new Muscat to Guangzhou route will strengthen the important political, economic and trade relations between Oman and China. We are confident that the service will be a great success and we look forward to a long and prosperous presence within the Chinese market.

“A major highlight of our Summer 2017 schedule will be our daily flights to Manchester, complementing the double-daily service we currently offer to London. The new service will offer easy access for international visitors to the north of the UK, and many more British travellers will enjoy the convenience of connecting with Oman Air’s global network.”

The strategic developments set out by Mr. Gregorowitsch and Mr. Al Busaidy were followed by a presentation on the subject of ‘Meeting customer expectations’, which was given by Abdulaziz Alraisi, Executive Vice President, Products and Brand Development.

Mr. Alraisi described how new menus had been developed for First Class, Business Class and Economy Class customers flying on European sectors. Guests at the press conference were invited to inspect the menus, which feature improved bakery products, a range of gourmet sandwiches and a selection of refreshed Omani dishes.

Mr. Alraisi went on to detail major changes in cabin service and branding at Oman Air. These include the introduction of improved inflight entertainment systems, which offer an increased choice of recently-released Hollywood movies and a broader range of TV programmes. A new safety video which showcases the destination of Oman, together with its rich historical and cultural heritage will also be introduced. In addition, cabin crew will undergo enhanced training to ensure that all customers are offered the very best inflight service.

“We are delighted to announce that Oman Air will unveil a brand-new First Class cabin aboard our Boeing B787-900 Dreamliner aircraft, which will be delivered in 2018. The new cabin will build on the powerful reputation that Oman Air has attracted for the luxury and exclusivity of our current First Class cabin.

“Furthermore, Oman Air is set to become the launch customer for brand new Business Class seats, which will be fitted to our single aisle aircraft from 2018.

“So, in fact, we do not aim to meet our customers’ expectations. Instead, we aim to exceed them. The products and services that we have introduced since 2014, and those we will be introducing in the near future represent exciting progress towards achieving the vision that our Chief Executive Officer has described to you: To Become the Best.”