On the heels of a nearly unanimous vote to strike by pilots flying for DHL, pilots from DHL’s largest North American contractor are picketing in New York

On the heels of a nearly unanimous vote to strike by U.S. pilots flying for DHL, pilots from DHL’s largest North American contractor are picketing in New York this morning outside the annual shareholder meeting of their parent company, Atlas Air Worldwide Holdings, Inc. (AAWW).

Atlas Air and Southern Air pilots are currently lined up on the Avenue of the Americas in midtown Manhattan, holding signs reading, “Our Families Deserve Better” and “Atlas Air Worldwide Holdings Pilots Ready to Strike.” The pilots are calling on Atlas Air and AAWW executives to stop driving down standards for pilots throughout the cargo industry.

“We’re here because we need Atlas to stop playing games and get serious about working with us to come to a fair contract agreement that ensures we can safely and efficiently meet the demands of clients like DHL and Amazon,” said Atlas Air Captain Mike Griffith who is protesting today.

Despite rising profits at AAWW and DHL, AAWW and its airline affiliates refuse to negotiate fairly with its Atlas, Polar and Southern pilots. In an effort to sidestep negotiations that had begun before the AAWW-SAI acquisition, AAWW and its airline affiliates are attempting to force the pilots to merge the now obsolete Atlas Air contract with Southern Air’s concessionary contract that was negotiated during bankruptcy. AAWW’s stated objective is to merge the two contracts through binding arbitration, rather than through traditional arms-length negotiations with its pilots in accordance with the Railway Labor Act, the federal statute that governs airline negotiations. This push to force arbitration upon the pilots is part of an overarching strategy to suppress wages and slash quality of life provisions and pilot work protections, thereby driving down standards for the entire industry.

“No one wants to work more for less,” added Griffith. “Yet, that is the equivalent of what AAWW is trying to do the pilots flying for Atlas and Polar.” 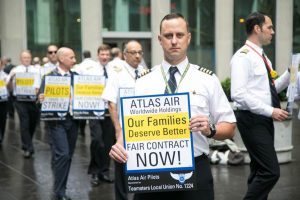 Meanwhile, the pilots flying for recently-acquired Southern Air were forced to give huge wage, benefit and work rule concessions when Southern Air was in bankruptcy and in danger of liquidation. The result is that the Southern Air pilots have continued working too many hours flying cargo around the world for very little pay and even less rest.  The current Atlas Air contract is also below industry standards. According to a comparison study conducted by Teamsters Local 1224, AAWW pilots are paid considerably less and work much longer hours than pilots who fly for UPS or FedEx. Pilots at Atlas, Polar and Southern reported being forced to fly long hours with minimal rest time in between flights, leading to dangerous fatigue.

“No pilot should have to work for 28 hours straight without any rest. It’s extremely dangerous, yet that’s the standard for many Southern Air pilots,” said Southern Air First Officer Philip Forsberg, who is protesting today alongside the Atlas pilots. “Since acquiring Southern Air, AAWW’s actions have made it clear that they have no intention of improving the dangerous workplace policies under which our pilots are forced to operate.”

Citing growing concerns over stalled contract negotiations, pilots at the three AAWW carriers and two additional North American DHL-contracted airlines, ABX and Kalitta Air, recently voted with 99 percent support to strike if necessary. Nearly 2,000 pilots voted. The pilots at the five carriers are represented by the International Brotherhood of Teamsters and its airline affiliate, Teamsters Local 1224.

A strike would halt AAWW’s global flying and cripple operations for DHL. DHL accounts for more than 50 percent of Atlas Air’s business, and it is the sole customer of Southern Air. A strike could also have a significant impact on Amazon.com. The e-retailer just signed an agreement with Atlas Air to double its fleet for domestic packages.

“Pilots across AAWW and other American carriers flying for DHL are united because we know our families deserve better. We deserve to be treated fairly, and we simply won’t stand for the global race to the bottom that is affecting the entire cargo industry,” said Teamsters Local 1224 President and Atlas Air Captain Daniel C. Wells. “AAWW executives and shareholders should be gravely concerned that the pilots who keep Atlas and DHL running are ready to strike.”

AAWW and DHL have all seen profits rise in recent years. DHL reported €59.2 billion (66.7 billion US dollars) in increased consolidated revenue this past year, with the express division – which includes the operations of AAWW and Southern Air– being its strongest and most profitable division. Adjusted net income attributable in 2015 to AAWW’s common stockholders totaled $125.3 million, or $5.01 per diluted share, on revenues of $1.8 billion.