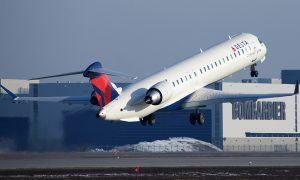 Bombardier announced today that its all-new CS100 has performed over 80 per cent of the required certification tests with more than 2,250 flight test hours to date.

The C Series aircraft is currently undergoing noise performance testing and is expected to meet those targets, making it the quietest commercial jet in production. Bombardier also confirmed that one of the C Series aircraft’s demonstration stops in September will be at its Bombardier Toronto site where many employees will see the aircraft fly for the first time.

“The summer months are proving very productive for the C Series aircraft as the flight test program continues to make solid progress – even setting a record with six test aircraft flying on the same day, logging in excess of a combined 20 hours,” said Fred Cromer, President, Bombardier Commercial Aircraft. “Passengers also flew onboard the CS100 for the first time as part of the cabin testing program and their feedback was very complimentary. The C Series continues to impress and is on track to achieving certification later this year and we continue to work with first operator SWISS as it readies for entry-into-service in the first half of 2016.”

Earlier in the summer, Bombardier announced that the C Series aircraft’s maximum range is confirmed to be up to 3,300 NM (6,112 km), some 350 NM (648 km) more than originally targeted. The aircraft is delivering more than a 20 per cent fuel burn advantage compared to in-production aircraft, and a greater than 10 per cent advantage compared to future re-engined aircraft.

With unmatched environmental and noise footprints, the C Series is undergoing testing to confirm aircraft’s community noise level is up to 20 EPNdB* below the Federal Aviation Authority’s Stage 4 limit, making it ideal for city centre operations.