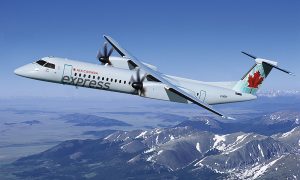 Chorus Aviation has announced that it will add 10 incremental growth aircraft to the Jazz Aviation fleet.

These aircraft will be operated under the Air Canada Express brand per Jazz’s Capacity Purchase Agreement (‘CPA’) with Air Canada.  Five 78-seat Q400 turboprops and five 75-seat CRJ705 regional jets will be delivered in 2016 and early 2017 respectively, and will remain in the CPA covered fleet until 2025.

“We’re very pleased to be experiencing this growth in Jazz Aviation fleet less than nine months after establishing the new commercial agreement with Air Canada,” said Joseph Randell, President and Chief Executive Officer, Chorus. “The addition of these 10 incremental aircraft demonstrates the confidence in Jazz Aviation reputation for being one of North America’s strongest regional operators and its ever-increasing cost competitiveness. While not material to the current $109.0 million annual fixed fee paid to Jazz under the CPA, the transaction will add another $2.0 million in such fees annually.  The addition of these larger gauged aircraft will further help reduce Jazz Aviation unit cost and increase its market competitiveness. These aircraft are in addition to the fleet modernization plan currently underway as a result of the recently amended CPA with Air Canada which originally called for a minimum of 44 Q400s and 16 CRJ705s by the year 2020.”