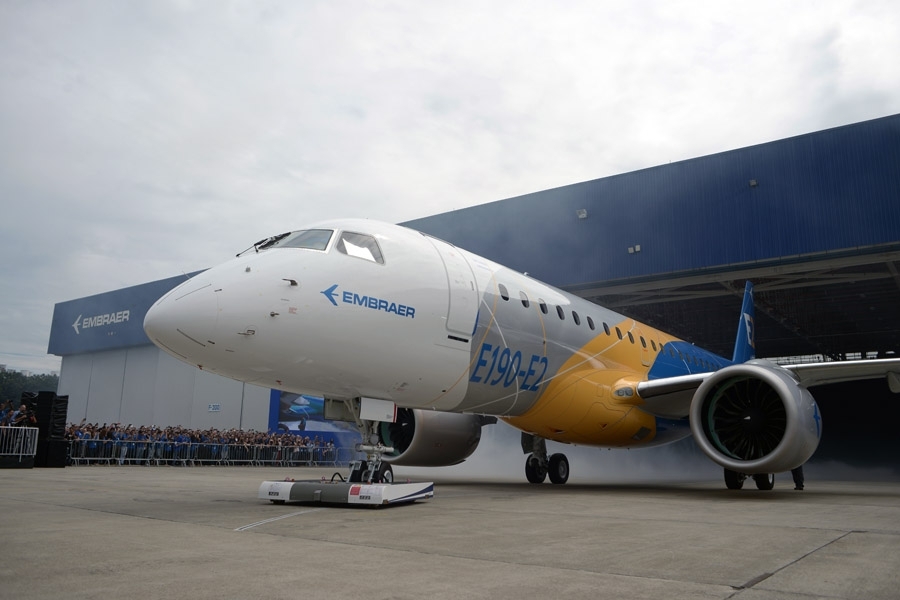 Embraer today took a step in the consolidation of its leadership by presenting the E190-E2, the first E2 jet, Embraer´s second generation of the E-Jets family of commercial aircraft.

The aircraft´s maiden flight is scheduled for the second half of 2016, with entry into service scheduled for 2018. The ceremony was held at the Company´s plant in Sao Jose dos Campos.

“Today we have taken another step into the future of Embraer commercial aviation with the world premiere of our second-generation E-Jets,” said Paulo Cesar Silva, President & CEO, Embraer Commercial Aviation. “I’m sure that as a result of this event, the market´s interest in the E2 will grow even further, increasing the commercial success of this program throughout the world.”

With an investment of USD 1.7 billion, the E2 program was launched in June 2013 and reinforces Embraer’s commitment to continuously invest in its commercial aviation products as well as maintain market leadership in the segment of 70 to 130 seats. The aircraft will have state-of-the-art engines, which, combined with new aerodynamically advanced wings, full fly-by-wire flight controls, and improvements to other systems, will deliver significant reductions in fuel burn, maintenance costs, emissions, and external noise.

Since the E2 was launched, the program has reached 640 commitments, 267 of which are firm orders and 373 of which are options and purchase rights, from both airline customers and leasing companies. Currently, the E-Jets are operating with about 70 customers in 50 countries and, with over 50% market share, they are the global leader in the segment of aircraft with up to 130 seats.

“The rollout held today marks the completion of the assembly of the first E190-E2 and paves the way for the start of the tests that will lead to the first flight,” said Luis Carlos Affonso, Senior Vice President Operations & COO, Embraer Commercial Aviation. “We are delighted to reach this phase of the program, considering all of the technical and economic objectives set out at its inception.”