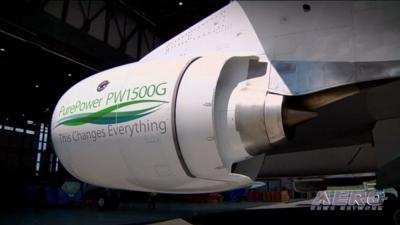 “Certification of the PW1500G engine is a significant milestone and a critical step in supporting the progressive transfer of the first CSeries flight test vehicle to the flight test program,” said Rob Dewar, vice president and general manager, CSeries, Bombardier Commercial Aircraft. “We are very pleased with the engine’s performance and the overall, steady progress of the CSeries aircraft program. We have met a number of key milestones over the last few months, accepted the first pair of PW1500G propulsion systems and are in the process of completing final assembly of the first CSeries flight test aircraft.”

“We have successfully demonstrated the durability and game-changing performance of our Geared Turbofan engine architecture,” said Bob Saia, vice president, Next Generation Product Family, Pratt & Whitney. “To date we have conducted over 9,000 hours of testing on our Fan Drive Gear System, demonstrating the service readiness of our gearbox. We have also validated the improvement in fuel efficiency and noise reduction that we targeted in 2007 when we launched the PurePower PW1500G program.”

Each CSeries aircraft is powered by two PurePower PW1500G series engines. The PurePower PW1500G engine uses an advanced gear system, allowing the engine’s fan to operate at a different speed than the low-pressure compressor and turbine. The combination of the gear system and an all-new advanced core deliver double-digit improvements in fuel efficiency, environmental emissions and noise.