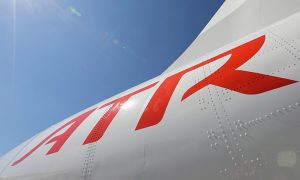 Skyworld Aviation has been appointed by Braathens Regional to remarket its fleet of Avro RJ85/100’s which become available later this year.

The package comprises eight Avro RJ100s and two Avro RJ85s with manufacture dates of between 1993 and 2001, plus accompanying spare engines, spares and tooling.

The aircraft will be released from service between 4Q19 and 1Q20 and are available for sale only. Serviceable aircraft and break up candidates are on offer.

Braathens Regional Airlines is the second-largest domestic Swedish airline, currently operating a fleet of Avro’s and ATR 72-500/600s. The airline provides scheduled services as well as charter and wet-lease solutions.

“Our relationship goes back many years, having arranged multiple regional aircraft lease and sale transactions on behalf of the airline and its associated companies. We are delighted to have the opportunity to work with Braathens again on this latest project,” SkyWorld Aviation said in a statement.

Skyworld Aviation is an aircraft marketing organisation with offices in the UK, France and Canada, specialising in the regional sector. Established in 1996, it primarily offers regional aircraft marketing and lease management services to a large client base worldwide.