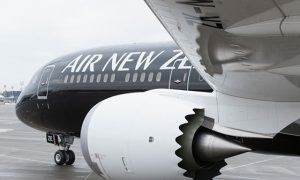 Air New Zealand alliance partner Cathay Pacific will take over operations of the Hong Kong-Auckland return service for most of the next three months.

The move allows Air New Zealand capacity flexibility in its international operations as it deals with the impact of issues with the Rolls-Royce engines on its Boeing 787-9 aircraft.

Cathay Pacific will introduce an additional Airbus A350-900 aircraft on the Auckland-Hong Kong route from 6 January to 19 January 2020. The 280-seat aircraft will operate daily and has Business, Premium Economy and Economy seating available for customers.

Cathay Pacific will also operate a Boeing 777-300ER on the same route from 1 February until 28 March 2020. The 294-seat aircraft also has Business, Premium Economy and Economy cabins and will operate daily in February and five times a week in March.  Customers booked to travel with Air New Zealand on this route during these two periods will be automatically transferred to these services for both periods.

“The Cathay Pacific Airbus A350-900 and Boeing 777-300ER are modern aircraft of a similar high standard to our Air New Zealand fleet, so we know customers will receive the high level of service Cathay Pacific is known for.

“This aircraft capacity will help fill the gaps in our schedule to get people to their destinations in the coming weeks and it’s been beneficial to have our alliance partner Cathay Pacific step in and assist us at this busy time.”

The airline announced last month it will be making some international changes to its schedule as a result of issues impacting some of its Rolls-Royce engines. This includes the suspension of its twice-weekly seasonal Christchurch-Perth service, canceling its second daily Auckland-Perth service from 10 December 2019 until 5 January and 20 other international cancellations from 10 December-2 January.

Rolls-Royce requires operators of its Trent 1000 TEN model engines to carry out more frequent maintenance due to an issue with the engine’s high-pressure turbine blades. Rolls-Royce does not have any replacement engines available while maintenance work is undertaken and has advised Air New Zealand there’s a significant wait for repair services.