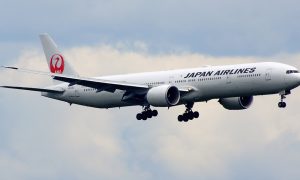 China Airlines and Japan Airlines today signed a memorandum of understanding to expand their strategic cooperation on cargo and passenger transportation.

Due to the popularity of Japan as a travel destination among Taiwanese people, as a first step, Japan Airlines, and China Airlines have agreed to strengthen the current cooperation by expanding the code-sharing agreement to cover all routes operated by both airlines between Japan and Taiwan from the second half of February 2017.

The total number of code-share flights will expand from 28 weekly flights on the Tokyo (Haneda) – Taipei (Songshan) route to 240 flights a week at the most (the number varies depending on seasonal schedules).

“The new memorandum with China Airlines is an important milestone in further enhancing the partnership between the two airlines to provide customers better access to the destinations between Japan and Taiwan,” said Hideki Oshima, JAL Executive Officer, International Relations and Alliances.

Japan Airlines was founded in 1951 and became the first international airline in Japan. A member of the oneworld alliance, the airline now reaches more than 305 airports in 51 countries and regions together with its codeshare partners with a modern fleet of more than 220 aircraft.

Founded in 1959, China Airlines employs more than 12,000 people worldwide and operates a fleet of 113 aircraft, making it the largest airline by size and frequency of service in Taiwan. China Airlines is also one of the 20 SkyTeam Alliance member airlines. China Airlines offers passengers access to an extensive global network of more than 17,343 daily flights to 1,062 destinations in 177 countries.