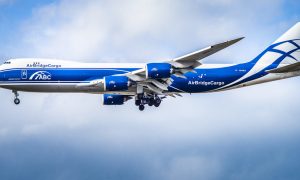 2016 is already a record-breaking year for AirBridgeCargo Airlines (ABC) following a further 30% year-on-year growth in tonnage in October to 57,608 tonnes.

With two months of the year still to go, ABC has achieved its thirteenth consecutive year of growth. In the 10 months ended 30 October 2016, the airline carried 498,177 tonnes across its growing international route network, a rise of 29% over the same period in 2015. Last year, the airline set a record of 483,000 tonnes flown.

Robert van de Weg, Senior Vice President, Sales & Marketing at Volga-Dnepr Group, ABC’s parent company, said: “Our continued strong growth is based on staying close to our customers and ensuring we support them with cargo capacity when and where they most need it. In such a challenging air cargo market, it is important to earn customer trust in the quality and reliability of your service and to demonstrate the ability to provide responsive solutions – now increasingly for special cargo categories like pharmaceuticals and oversized cargo.”

The new record is based on tonnage flown onboard AirBridgeCargo’s own Boeing 747 cargo fleet and on ACMI partner aircraft.

2016 has seen further expansion of the airline’s cargo network with new routes to meet the requirements of its global customers. A new Houston-Abu Dhabi operation was followed by the introduction of all-cargo services connecting ABC’s global hub in Moscow with Chongqing in China, Phnom Penh in Cambodia, Seattle in the U.S, Heathrow in the United Kingdom and, most recently, Oslo, Norway, to serve the country’s thriving market for salmon exports.

In September, AirBridgeCargo took delivery of its ninth new Boeing 747-8 Freighter, taking its total fleet to 16 747Fs. This latest aircraft was the fifth new 747-8F to join the fleet of Volga-Dnepr Group since it confirmed an order with Boeing for 20 more 747-8Fs in July.

Through its hub in Moscow, ABC is able to connect origin and destination points across its network serving Europe, Russia, Scandinavia, North America, the Middle East and Asia Pacific within a 48-hour cargo delivery time, including cargo handling.