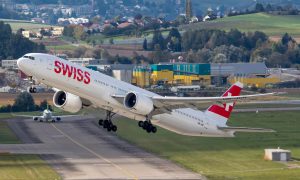 SWISS has terminated its negotiations with the Aeropers pilots’ association on temporary crisis measures in response to the coronavirus pandemic without reaching a result.

According to the airline, “Aeropers was not prepared to make sufficient concessions for the crisis years. In the light of this, SWISS has served ordinary notice to terminate the present collective labour agreement (CLA) for its cockpit personnel on 31 March 2022. SWISS remains committed to its social partnership, and is offering negotiations on a new CLA”.

Like the rest of the global airline industry, Swiss International Air Lines has been severely affected by the coronavirus pandemic. In the first nine months of 2020 the company sustained an operating loss of more than CHF 400 million and saw its passenger numbers decline by around 70 per cent. On top of this, the company is currently drawing on a state-backed bank loan facility of up to CHF 1.5 billion which it plans to repay as soon as possible.

In response to these developments, SWISS has subjected itself to a rigorous cost-saving programme. Substantial cost economies are essential in all corporate areas. And with these aims in mind, crisis agreements extending over several years have been concluded with the company’s social partners for its ground and its cabin personnel.

SWISS also initiated negotiations with the Aeropers pilots’ association in August 2020. As a result of the projected reduction in its total flight volumes, SWISS will have a significant surplus of pilots in the next few years. The aim of these negotiations was to conclude a new and forward-looking collective labour agreement (CLA) which would be aligned to the demands of the difficult crisis years ahead. This should supersede the present CLA of 2018, which is not suited to either the challenges of the coronavirus crisis or the re-establishment of the company in an uncertain and volatile future.

The airline said in a statement that Aeropers, however, was only willing to discuss temporary crisis measures while retaining the present CLA. SWISS was also prepared to negotiate on such temporary measures, under the clearly-formulated condition that Aeropers agreed to significant crisis contributions and an expanded scope of action and response.

After several months of intensive negotiations, SWISS has regretfully concluded that Aeropers is unwilling to commit to adequate contributions in response to the current crisis. “Without substantial contributions and an expanded scope of action during the coronavirus crisis, we believe it would be irresponsible from a corporate and a business perspective to retain the present collective labour agreement,” explains SWISS Chief Operating Officer Thomas Frick.

“We remain fully committed to our social partnership,” Thomas Frick continues. “And we are convinced that, together with Aeropers, we can conclude a viable new collective labour agreement for our pilots that pays due regard to the present crisis times, that is fit for the future and in particular also meets the requirements of modern working time models.”