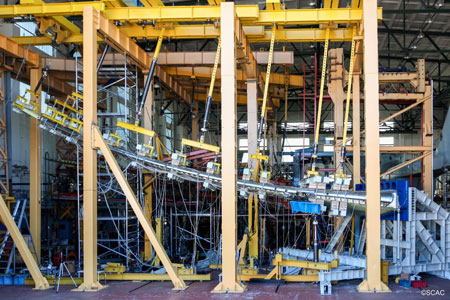 Static tests of Sukhoi Superjet 100 wing panel for future installation of winglets have been successfully completed.

Tests have been performed to verify the strength of the structural elements by means of application of design load to the wing and winglet mock-up with the use of special equipment. After the test object unloading no deformations or damages have been revealed demonstrating successful test completion. Test results will be taken into consideration during finalization of the report on strength of SSJ100 aircraft wing with installed saber winglet.

New saber winglets in the wing structure have resulted in change of loads affecting the wing during the flight. Consequently reinforcement of particular areas of existing wing has been achieved with regard to new loads distribution.

Use of winglets will enhance takeoff and landing performance, increase Sukhoi Superjet 100 fuel efficiency as well as flight range for not less than 3%, more than that increased climbing characteristics will expand limits for hot and high operations.

The tests have been performed in AVIATEST (Riga, Latvia) research and testing centre as a part of SSJ100 performance enhancement. AVIATEST has won a tender for such test completion and SCAC has been successfully working with it since 2005. The specialists of the Centre have developed and produced the test rig including center wing mock-up for attachment of the wing panel in a way similar to its connection to the aircraft. The wing panel and winglet strength mock-up have been provided by SCAC, the manufacturer of Sukhoi Superjet 100.

Successfully performed wing static tests constitute an important part of the development activities for installation of winglets on SSJ100 aircraft. Preparation of winglet structure for static and endurance tests is in progress. Winglet bench tests to prove its lightning strike resistance will be completed till the end of the year. Ground and flight tests of the aircraft with installed winglets will also follow. Certification of SSJ100 aircraft with saber winglets and possibility of its optional installation on new aircraft of this type will arise from these test results.