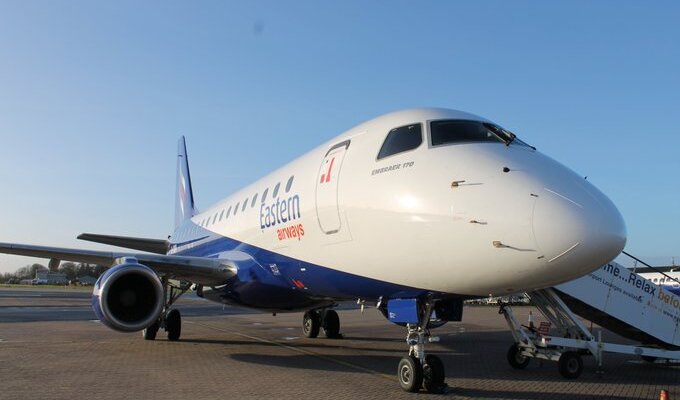 From 14th September 2020, the Teesside – Heathrow service is reconnected using a 76-seat E-Jet Embraer 170 aircraft, following a gap of more than a decade. The UK’s regional airline will initially offer a daily service to the capital which will offer passengers from Durham, Middlesbrough, Darlington, Hartlepool, Middlesbrough, Teesside, and North Yorkshire hundreds of onward connections to the world.

This latest news at Teesside is a further expansion of Eastern Airways’ developing route network from the north east airport. Since restrictions have been eased following the Covid-19 pandemic lockdown, the airline has reintroduced Teesside flights to Aberdeen and Belfast City while starting new routes to London City and Newquay.

The daily departures are timed to maximise the array of world-wide connections available while also supporting quick and easy access to London and the South-East on the circa 1-hour flight.

“As the UK’s Regional Airline, the opportunity for Eastern Airways to connect Teesside to London Heathrow, the UK’s primary hub for worldwide connections is significant in the regions’ economic prosperity and economic recovery. Offering an initial daily e-Jet operated service helps add further London capacity and makes reaching the capital or getting to the North East a little over an hour away, with the array of connections worldwide this opens up. We look forward with our partners at Teesside International Airport and London Heathrow Airport to restoring such a major air-link missing for over a decade.”

“Since I did a deal to take back control of our airport last year to save it from closure, we’ve announced some brilliant new daily and seasonal routes.

“But whenever I’ve revealed a new service people have said, ‘that’s great, but what about a connection to Heathrow?’ Well, I can now say we have flights to one of our most-requested destinations, and it starts next month. Whether people from Teesside, Darlington and Hartlepool are looking to travel for business or pleasure, they now have a range of options for getting to London.

“This is another massive vote of confidence in our airport and I’d like to thank Heathrow and Eastern Airways for working with us to realise a key route for any serious airport.

“Our airport is much more than just flights though; it is hugely important to our local economy and it is playing a key part in my plan for jobs. I’ve always said that investment won’t come on a bus, it will come through our airport terminal which in turn will create good quality local jobs for local workers.”

“We are delighted that Eastern Airways will launch a new connection between Teesside and Heathrow for the first time in over a decade. Adding the UK’s hub airport to Teesside’s network demonstrates the growth ambitions of the Tees Valley region, and will provide a vital leveling-up boost – unlocking a huge amount of potential for the region as we build the UK’s economic recovery.

“Heathrow is committed to strengthening our regional connections across the UK with our discount on domestic routes, and we believe this new service will be a springboard for the great businesses in the region to reach out to the world. We’re looking forward to welcoming the first passengers in September.”

Services continue to be carefully reintroduced since Covid-19 restrictions began to ease with extensive cleaning measures on-board and throughout all aspects of the airport. A full anti-bacterial wipe down of all touchpoints between every service operated and also a comprehensive aircraft night-stop sanitization is implemented.

The independent operator was formed in 1997 and had moved quickly, prior to the Covid-19 pandemic, to return back to its own standalone booking facilities after its former franchise partner, Flybe, went into administration earlier in March.