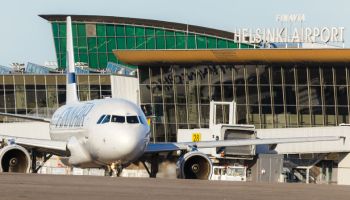 It affects security control at the airport and ground handling on Norwegian flights.

The strike started today at 2 pm and it will end at 7 pm.

This strike is caused by the service company Airpro’s new general agreement, which came into force on 1 February in adherence to the Competitiveness Pact. The agreement exists between labour unions JHL and Pardia, and is legally binding for IAU members. IAU was previously a party to the Airpro agreement. It, however, seceded from the Competitiveness Solution and is demanding better benefits for its members.

Finavia considers it regrettable that employee action is being used to affect smooth air traffic.

The strike notice of Labour union Pro concerning possible strikes on March 5 and 6 for the cabin crew of  three charter airlines TuiFly Nordic, Thomson and Thomas Cook has been cancelled.

On March 6 at 03-09 am strikes would affect flights of several airlines and air traffic at Finnish airports. Effects would be more extensive than on Friday. Situation can be later estimated in more details.

On March 10 at 15-19 pm & March 14 at 03-09 am strikes would include air traffic at several airports. Situation can be later estimated in more details.