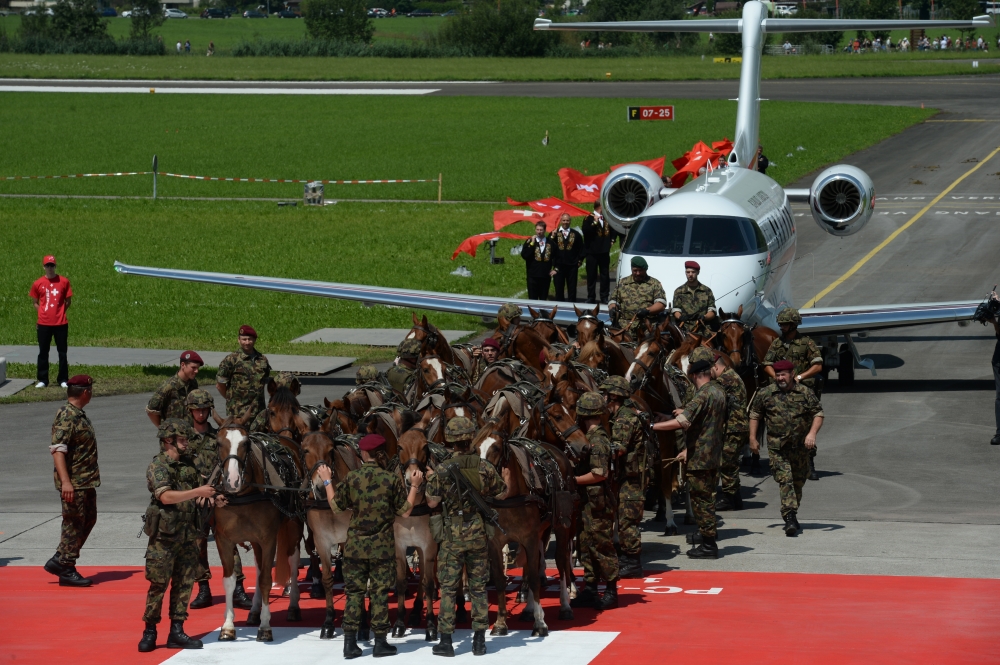 Some 25,000 spectators watched as the show took place at Buochs airfield in central Switzerland.

The show got underway at 12.35 when a team of 24 horses, chosen to symbolise the number appearing in the PC-24 product name and its future mission profile as a ‘workhorse’, pulled the first prototype out of the production halls. The new jet sports an eye-catchingly elegant design in Swiss style, featuring chrome and gold-coloured Alpine flowers.

The rollout was preceded by a fly-by of all the aircraft which have ever reached series production in the company’s 75 year history. Over 120 performers and more than 160 children of company employees made the rollout an unforgettable event for high-ranking guests, customers and fans of Pilatus.

Oscar J. Schwenk, Chairman of the Board of Directors of Pilatus, is enthusiastic about the new PC-24 and the event:

“Today’s celebration is a clear sign of our commitment to Switzerland as a centre of vision and action. Our company was established here in Stans exactly 75 years ago. We have seen our activities grow and expand here in Stans, and this is where we want to be in the future: in Stans, producing our aircraft for sale to customers around the world.

It’s wonderful that so many thousands of guests from Switzerland, and also from countries nearby and further afield, have made the effort to be with us here today, to celebrate this event together. The PC-24 marks a really important milestone in our 75-year history“.

Federal Councillor Ueli Maurer, who attended the event, paid tribute to the success of Pilatus in his speech, remarking on the new Swiss business jet with great pride. He also announced that the members of the Federal Council have voted to buy a PC-24, a further sign of the confidence placed in the new Pilatus-produced jet.

The 100% newly developed PC-24 is the first time that traditional Pilatus values such as versatility, efficiency and Swiss precision have been combined in a jet. The PC-24 is the world’s first ever business jet to come equipped as standard with a cargo door, with the kind of performance specification that allows it to operate in and out of very short runways or even unmade strips.

A total of three prototypes will be produced for the PC-24 test flight programme. The maiden flight of the first prototype, which was presented at the rollout, will go ahead in spring 2015. Final certification and start of deliveries to customers are planned from 2017.

Pilatus sold 84 PC-24s at the European Business Aviation Conference & Exhibition (EBACE) in May this year.