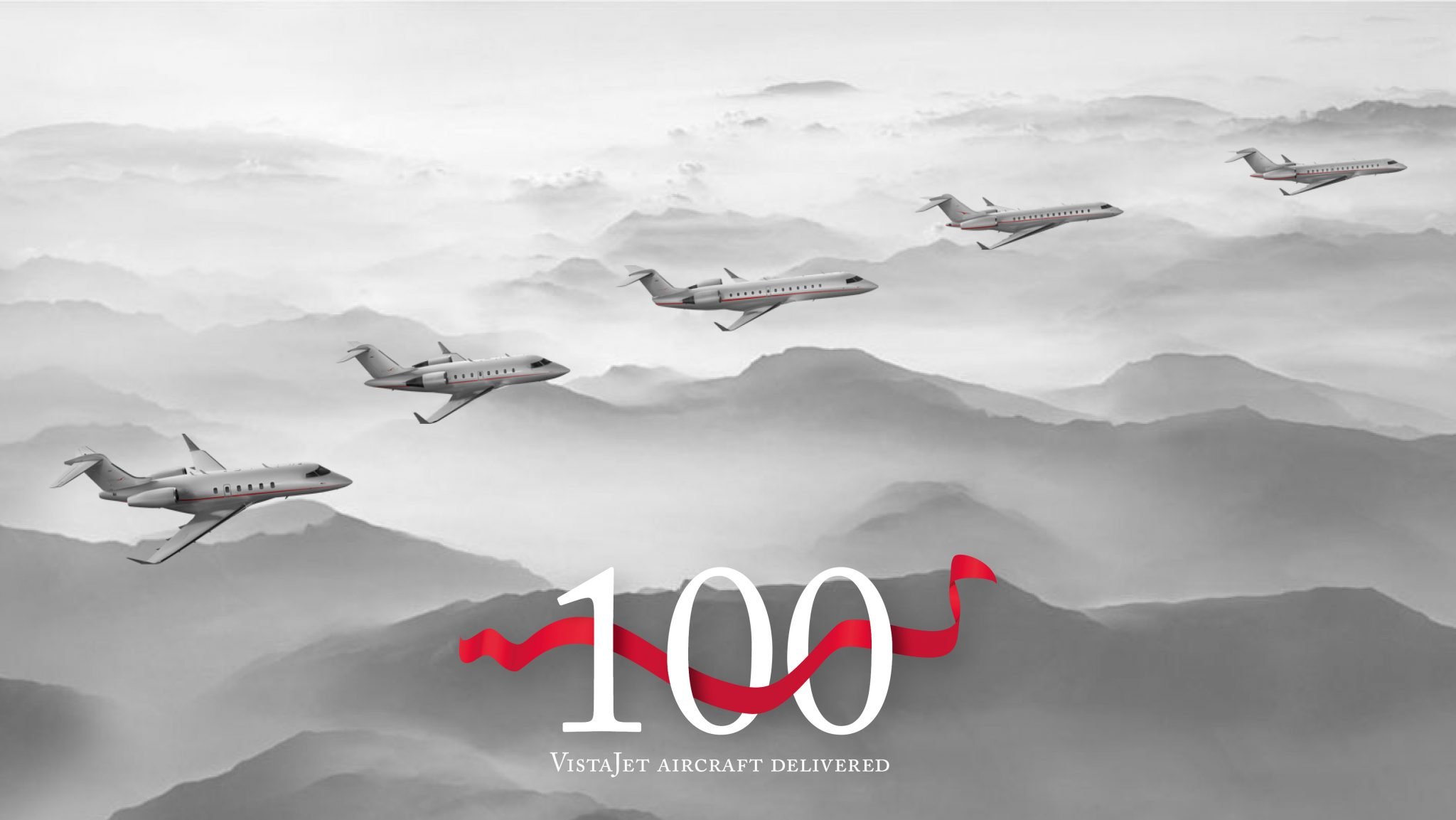 VistaJet today reached an important milestone in its history when it welcomed its 100th ever aircraft to its fleet.

The company has invested billions in jets in the past decade, growing its fleet from just 5 jets in 2006 to over 60 today, with a market value of more than $1.8bn.

The company has come a long way in the past decade. In 2006, VistaJet travelled to 233 destinations, carrying less than 5,000 passengers. VistaJet has now landed at 1,489 airports worldwide, meeting the needs of over 37,000 passengers in 2015 alone, and has flown over 210,000 passengers in its history. It has also invested in its technology and operations. The company’s first office was in Salzburg, Austria, and employed just 10 people. It now has a global office network across 4 continents, and employs over 750 people. Despite operating in a competitive market, in just ten years VistaJet has grown to become the global leader in business aviation.

On top of that, to help make the business as efficient as possible, VistaJet has also invested in its operations in Malta, and has moved its corporate headquarters to the country. Along with employing over 250 people on the island, VistaJet also has 52 aircraft on the Maltese registry.

The business aviation market more generally has also changed dramatically over the past 10 years. Where Europe was VistaJet’s most popular destination in 2006, it has now been overtaken by the United States and Asia. Since introducing a B-registered aircraft to fly domestically in China last year, VistaJet has seen a 30% growth in Asia flight traffic. In 2015, VistaJet saw a 139% growth in US flight traffic. The demand for private aircraft has not only grown in volume, it has also grown geographically. In 2006, VistaJet typically served 30% of the globe. It now regularly serves over 90% of countries worldwide, with a VistaJet aircraft taking off every 36 minutes.

VistaJet’s sustained period of growth demonstrates the compelling nature of its offer, and the continued popularity of its unique subscription model. Nine out of ten VistaJet customers currently renew or add extra flying hours to their contracts upon completion. With its asset light model, VistaJet pioneered the concept of the shared economy, now a fundamental way in which the world does business. Any corporation or individual flying 500 hours or less a year could benefit from choosing VistaJet. For clients flying more than 500 hours a year, VistaJet offers multiple simultaneous aircraft usage anywhere in the world, an important option for heavy users of business jets.

This increased reach and expertise comes at a time when individuals and businesses are moving away from private ownership due to the need for complete flexibility, and the risk of relying on a limited number of aircraft. The number of jets for sale has risen by as much as 217% year-on-year for some models. ,

To keep its fleet as modern and up-to-date as possible, VistaJet regularly replaces older aircraft with the latest models. It has replaced almost 40 aircraft in its history, ensuring customers have the very best experience when they fly with the company. This track record of consistently investing in its offer means that VistaJet has one of the largest and youngest wholly owned fleets in the market. It has over 60 operational aircraft, all of which are on average just two years old. The size of the fleet also means that VistaJet’s regular service area now covers 90% of the globe.

“This is a huge milestone for VistaJet. We are very proud to be welcoming the 100th aircraft to our fleet today. Thanks to the investment we have made since 2004, we have over 60 of the latest, most efficient aircraft in the market, and a regular service area of more than 90% of the globe. In the current market where private ownership is becoming less and less of a viable option, it makes sense for customers to leave the asset risk and up-front capital costs to VistaJet. Our clients simply pay for the time they spend in the air. No other operator can offer the same, guaranteed global reach at fixed rates, and as little as 24 hours’ notice. But we are not resting on our laurels. We have clear execution plans to increase our customer base and the number of destinations we serve still further, and we will continue to add to our fleet in the months and years ahead”.