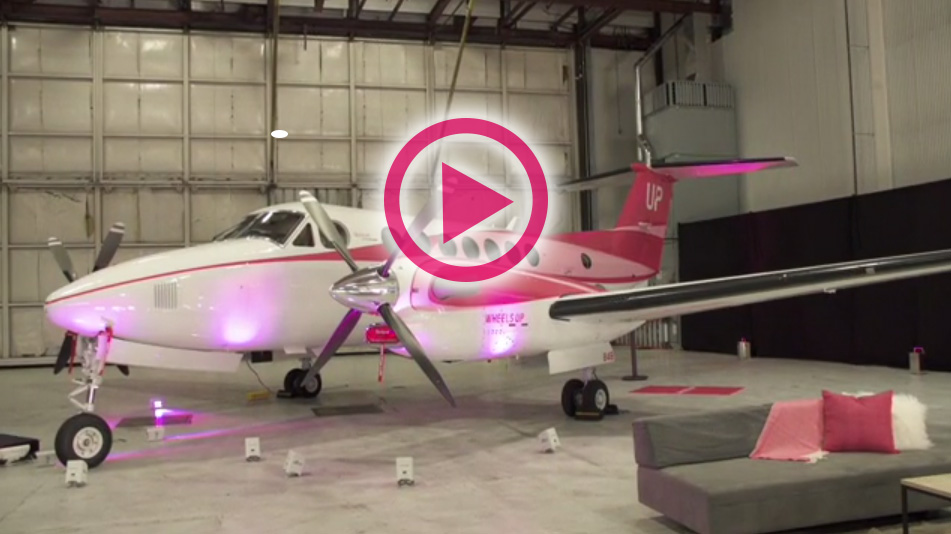 The event hosted by Kenny Dichter, Founder and CEO of Wheels Up, kicked off the #WheelsUpGoesPink campaign in support of the Company’s ongoing commitment to the Dubin Breast Center of The Tisch Cancer Institute at Mount Sinai in New York City, one of the world’s most renowned and advanced facilities for breast cancer treatment and research.

“The Wheels Up Pink Plane will serve as a symbol to create conversation and to fund the invaluable work of Dr. Eva Andersson-Dubin, Dr. Elisa Port and the entire team at the Dubin Breast Center, as well as our commitment at Wheels Up to making a difference in the fight against breast cancer,” said Dichter.

#WheelsUpGoesPink, a FLY-A-THON campaign to benefit the Dubin Breast Center, invites Wheels Up members, and the general public, to contribute to the Dubin Breast Center in any dollar amount of their choice for every Pink Plane revenue hour flown throughout October 1, 2015-September 30, 2016 (up to a maximum of 600 revenue hours) and/or to make a one-time donation in any dollar amount. Wheels Up will also donate a portion of the membership fee for each membership purchased during the month of October 2015. The Pink Plane, the 45th aircraft in the Wheels Up fleet, will remain in the fleet indefinitely.

“For the past five years, the Dubin Breast Center has brought together clinical and surgical expertise and the latest in research to provide the finest in patient care,” said Dennis S. Charney, MD, Anne and Joel Ehrenkranz Dean, Icahn School of Medicine at Mount Sinai and President, Academic Affairs, Mount Sinai Health System. “We appreciate Kenny Dichter and the Wheels Up team for their generous efforts to support the Center, ensuring it can continue not just to deliver optimal care, but to power the research and clinical trials that change the way we understand and treat breast cancer.”

Eva Andersson-Dubin, MD, co-founder of the Dubin Breast Center of The Tisch Cancer Institute at Mount Sinai, says, “The Dubin Breast Center is truly an innovative place, and Kenny Dichter and the energetic team at Wheels Up have put together an innovative campaign to match in the Pink Plane. As a breast cancer survivor, a physician, and a philanthropist, I am truly grateful for all that they are doing to further the work of our Center.”

Elisa R. Port, MD, FACS, Co-Director of the Dubin Breast Center and Chief of Breast Surgery, The Mount Sinai Hospital, says, “The Pink Plane is a symbol of hope and optimism for all women and men affected by breast cancer, and it is our honor for the Dubin Breast Center to be the recipients of this creative campaign. The funds raised through the Pink Plane campaign will help further research in breast cancer and the provision of extraordinary care we give to women, regardless of their socioeconomic background.  We thank Kenny Dichter and the Wheels Up team for their support and generosity.”