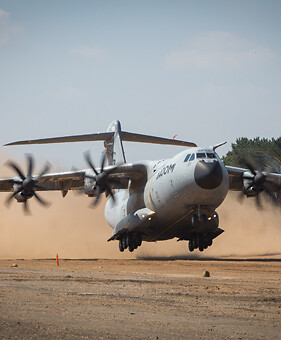 Airbus Defence and Space has successfully demonstrated the capability of the A400M new generation airlifter to operate on a sand runway.

Airbus Defence and Space has successfully demonstrated the capability of the A400M new generation airlifter to operate on a sand runway, the last of three unprepared types of surface on which it will be certified.

The tests using the development aircraft MSN2 took place over a three week period in August on a specially constructed airstrip at Woodbridge, UK.

A final week of tests will include operations at increasingly higher weights. The A400M demonstrated excellent performance in taxying manoeuvres, such as U-turns, and during take-off and landing on the 1,600m (5,250ft) strip.

These tests followed earlier successful results on the gravel surface at Ablitas in Spain and a grass runway at Écury in France.

The Airbus A400M is a four-engine turboprop military transport aircraft. It was designed by Airbus Military (now Airbus Defence and Space) as a tactical airlifter with strategic capabilities to replace older transport aircraft, such as the Transall C-160 and the Lockheed C-130 Hercules.

The A400M is positioned, in terms of size, between the C-130 and the C-17; it can carry heavier loads than the C-130, while able to use rough landing strips. Along with the transport role, the A400M can perform aerial refuelling and medical evacuation when fitted with appropriate equipment.

Between 2009 and 2010, the A400M faced cancellation as a result of development program delays and cost overruns; however, the customer nations chose to maintain their support of the project. A total of 174 A400M aircraft have been ordered by eight nations as of July 2011.