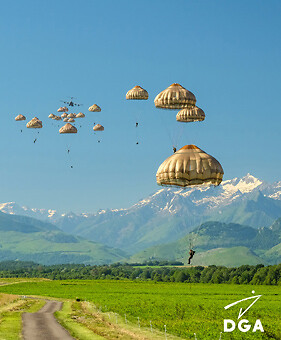 The photo shows 30 paratroopers being dropped at the Tarbes drop zone in southern France and certification of this capability is expected imminently.

Continuing trials will move stepwise to 40 paratroopers and beyond as the capability is demonstrated in flight-test.

The A400M was launched in May 2003 to respond to the combined needs of seven European Nations regrouped within OCCAR (Belgium, France, Germany, Luxemburg, Spain, Turkey and the UK), with Malaysia joining in 2005.

The A400M made its first flight on 11 December 2009. The first production aircraft was delivered to the French Air Force in August 2013 and in service a year after.

The A400M already has seen operational use with the French and Turkish Air Forces in Afghanistan, the Central African Republic, African’ Sahel Region, Mali and in the Middle East to support the air operations over Iraq and Syria.