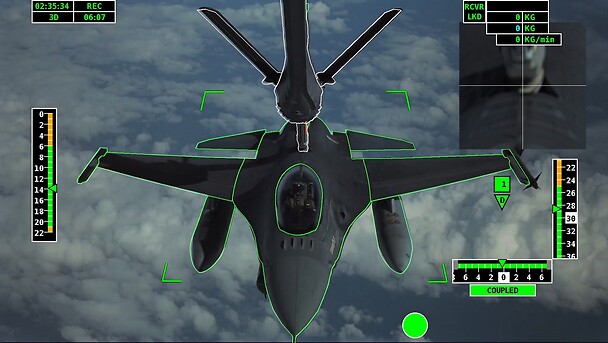 Airbus Defence and Space has successfully demonstrated automatic air-to-air refuelling (AAR) contacts with a fighter aircraft from a tanker’s refuelling boom, the first time in the world that this has been done.

Airbus’ A310 MRTT company development aircraft performed six automatic contacts with a F-16 of the Portuguese Air Force in a demonstration of a technique which the company believes holds great promise for enhancing in-service AAR operations.

The system requires no additional equipment on the receiver and is intended to reduce boom operator workload, improve safety, and optimise the rate of AAR in operational conditions to maximise combat efficiency. It could be introduced on the current production A330 MRTT as soon as 2019.

Initial approach and tracking of the receiver is performed by the tanker’s Air Refuelling Operator (ARO) as usual. Innovative passive techniques such as image processing are then used to determine the receiver’s refuelling receptacle position and when the automated system is activated, a fully automated flight control system directs the boom towards the receiver’s receptacle. The telescopic beam inside the boom can be controlled in a range of ways including: manually by the ARO; a relative distance-keeping mode; or full auto-mode to perform the contact.

In the 21 March flight off the Portuguese coast, the tanker performed the scheduled six contacts, at flight conditions of 270KT and 25,000ft over a 1hr 15min test period. Both crews reported a faultless operation.

David Piatti, Airbus Test ARO, or “boomer”, on the tanker, said: “The most important thing was that the system could track the receptacle. It was very satisfying because it worked perfectly and we could perform the contacts with the automation switched on as planned. It will certainly reduce workload, especially in degraded weather conditions.”

The F-16 pilot, known by his callsign “Prime”, said: “The test mission was pretty uneventful and accomplished with no unexpected issues – which is a good sign. From the moment that the boomer accepted the contact the boom was immediately in the correct spot. For the contact itself, it was very precise and expeditious. You can notice the difference – the less that you feel in the cockpit then the more precise you know the tracking is.”

Miguel Gasco, Head of Airbus Defence and Space’s Incubator Laboratory which coordinated the development, said: “This represents a fundamental advance in boom AAR operations, with the promise of increasing the rate of contacts, notably reducing operator workload, and enhancing safety. The automated boom operation is an important pillar of our Smart MRTT development that is already underway.”

The imaging technology underlying the Automatic AAR technique was originally used by Airbus’ Space division to develop solutions for refuelling satellites in space or for space debris removal and was further developed and applied by Airbus Defence and Space’s Incubator Laboratory for the tanking application.