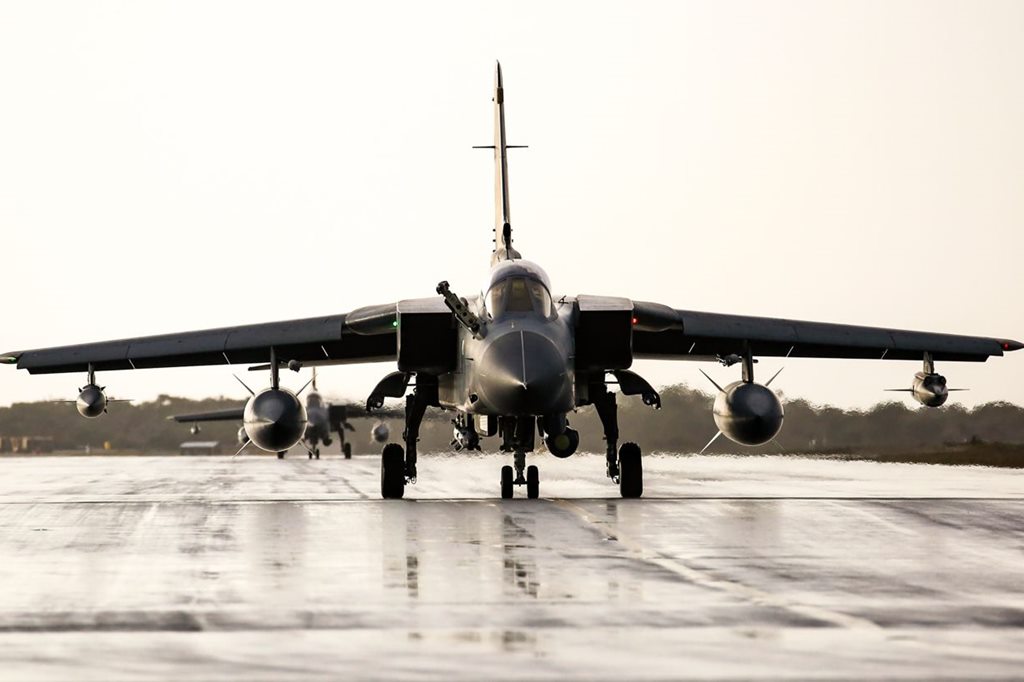 After almost 40 years serving the UK on military operations across the world, iconic RAF Tornado jets have returned home for the last time.

First entering service in 1979, the fast jets have been used in operations across the world, most recently bombarding Daesh to push the terrorist group back through Syria and Iraq.

Families and friends of the present-day squadron members were on hand to welcome them back to RAF Marham, Norfolk.

The weapons capabilities of the soon-to-retire Tornados are now being delivered by RAF Typhoon jets, which will continue to take a leading role in the Coalition’s mission against Daesh. Under ‘Project Centurion’, worth £425million over the past three years, the Typhoon can now also launch the world-leading Meteor air-to-air missile, the Stormshadow deep strike cruise missile and the precision attack missile Brimstone.

These improved RAF Typhoon jets will form the backbone of the UK’s combat air fleet, alongside the recently introduced new fleet of F-35 Lighting jets over the coming years.

The Tornado will be officially retired from service at the end of March and will only be used for training purposes over the UK in the intervening period.

Originally named the Tornado GR1 the aircraft’s first use in live operations was during the Gulf War in 1991 when 60 Tornado GR1s were deployed from bases in Saudi Arabia and Bahrain. Later they were upgraded to the GR4 model, which has been used ever since over the skies of Kosovo, Afghanistan, Iraq and Syria.

“It is with a heavy heart, but enormous pride, that we bid farewell to the Tornado from operations. This truly is the end of an era, having played a vital role in keeping Britain and its allies safe for four decades.

“But, after so long in service, it is only right that we now look to the future. The combination of our state-of-the-art F35s and the Typhoon’s new weapon systems will keep us as a world leader in air combat for a generation.”

“My sincerest congratulations to the Tornado Force, returning home after more than 4 years of continuous commitment to defeating Daesh in Iraq and Syria – an exceptional effort from everyone, well done and thank you.

“As a Tornado GR4 pilot myself, I have seen the aircraft develop over its nearly 40 years of service into an outstanding combat aircraft, flown, maintained and supported by similarly outstanding air and ground crew.  The Tornado Force has been continuously deployed on operations since 1990, serving with immense distinction in Iraq, Syria, Afghanistan, Libya and the Balkans.

“I will personally be very sad to see the Tornado retire, but it is time now to pass the baton to our next generation combat aircraft.  The F-35B Lightning is now operational and the Typhoon is now fully multi-role capable and able to take on the Tornado’s missions.

“We can all take immense pride in what the Tornado has achieved in defense of the nation over nearly four decades, and reflect back on the courage, commitment and achievements of everyone who has contributed to the success of this extraordinary aircraft.”

The RAF has already trialled its Typhoon and F-35 Forces’ abilities to work together. In a series of operational trials, the evidence gathered has confirmed the potency of the combination and demonstrated the effectiveness of both platforms when operating alongside one another.

With its larger payload and increased agility and range, the Typhoon will operate in concert with the stealthy F-35 and its next-generation sensors, making the RAF one of the few air forces with the ability to exploit the synergy of 4th and 5th generation combat aircraft and delivering the UK a potent force equipped to counter evolving threats in the global environment.

The UK is a world leader in the combat air sector, which supports over 18,000 highly skilled jobs with a mix of skills and technologies unique in Europe. The sector delivers a turnover in excess of £6bn a year and has made up over 80% of defense exports from the UK over the last ten years.