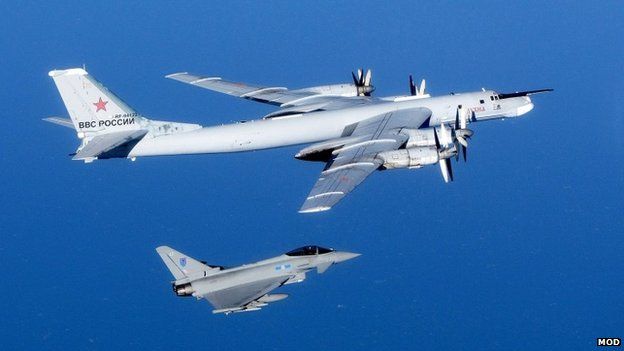 The Russian Blackjacks long-range bombers were not talking to air traffic control, making them a hazard to all other aviation.

“Russian bombers probing UK airspace is another reminder of the very serious military challenge that Russia poses us today. We will not hesitate to continually defend our skies from acts of aggression. Once again the rapid reactions of our RAF have demonstrated how vital our Armed Forces are in protecting Britain.”

The RAF worked closely with NATO partners to monitor the jets as they passed through a variety of international airspace before they were intercepted by the RAF over the North Sea. Subsequently, our fighters escorted the Russian Blackjacks north, out of the UK’s area of interest. At no time did the Russian bombers enter UK sovereign airspace.

RAF QRA was launched today because the Russian Military aircraft were not talking to air traffic agencies. The RAF routinely intercept, identify and escort Russian aircraft that transit international airspace within the UK’s area of interest.