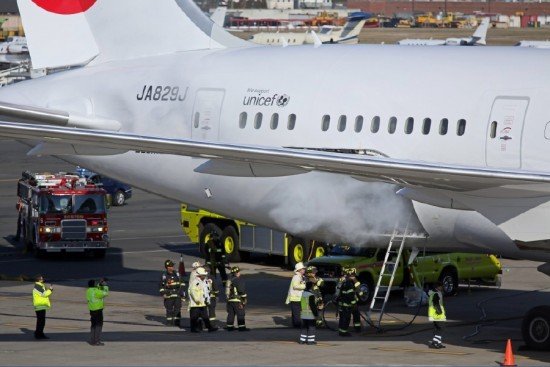 The National Transportation Safety Board (NTSB) released the fourth update on its investigation into the Jan. 7 fire aboard a Japan Airlines Boeing 787 at Logan International Airport in Boston.

The fire occurred after the airplane had landed and no passengers or crew were onboard.

The event airplane, JA829J was delivered to JAL on December 20, 2012. At the time of the battery fire, the aircraft had logged 169 flight hours with 22 cycles. The auxiliary power unit battery was manufactured by GS Yuasa in September 2012.

NTSB investigators have continued disassembling the internal components of the APU battery in its Materials Laboratory in Washington, and disassembly of the last of eight cells has begun. Examinations of the cell elements with a scanning electron microscope and energy-dispersive spectroscopy are ongoing.

A cursory comparative exam has been conducted on the undamaged main battery. No obvious anomalies were found. A more detailed examination will be conducted as the main battery undergoes a thorough tear down and test sequence series of non-destructive examinations.

In addition to the activities at the NTSB lab, members of the investigative team continue working in Seattle and Japan and have completed work in Arizona. Their activities are detailed below.

The airworthiness group completed testing of the APU start power unit at Securaplane in Tucson and the APU controller at UTC Aerospace Systems in Phoenix. Both units operated normally with no significant findings.

Two additional NTSB investigators were sent to Seattle to take part in FAA’s comprehensive review. One of the investigators will focus on testing efforts associated with Boeing’s root cause corrective action efforts, which FAA is helping to lead. The other will take part in the FAA’s ongoing review of the battery and battery system special conditions compliance documentation.

The NTSB-led team completed the component examination of the JAL APU battery monitoring unit at Kanto Aircraft Instrument Company, Ltd., in Fujisawa, Kanagawa, Japan. The team cleaned and examined both battery monitoring unit circuit boards, which were housed in the APU battery case. The circuit boards were damaged, which limited the information that could be obtained from tests, however, the team found no significant discoveries.

The NTSB will provide another factual update on Tuesday, Jan. 29, or earlier if developments warrant.