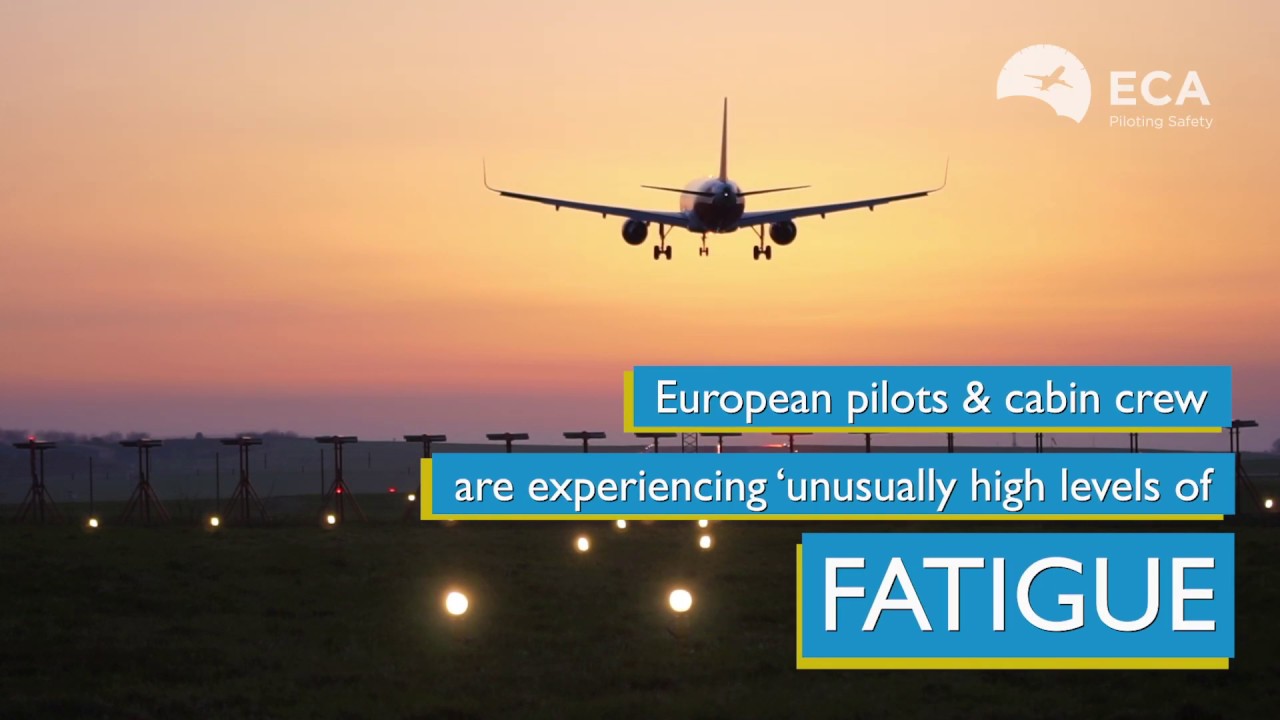 European pilots and cabin crew are experiencing unusually high levels of fatigue, incompatible with an acceptable level of flight safety, despite recent European legislation that is supposed to counter this.

A new study reveals major shortcomings of the Flight Time Limitations (FTL), i.e. the rules governing how long pilots can fly, be on duty and have to rest, for night flights and duties that disrupt the human body clock.

The new study, based on real-life operations of 24 airlines and carried out on behalf of the EU Commission and European Aviation Safety Agency (EASA), shows that night flights and ‘disruptive schedules’ of aircrew result in very high fatigue levels. These are two areas that an EU-wide survey among 15.680 pilots and cabin crew (in Spring 2017) had identified as potential ‘fatigue hot spots’ and which merited further in-depth research to identify whether EU FTL rules are ‘effective’ to prevent fatigue on board of Europe’s aircraft.

Night flights come out as particularly fatiguing. European FTL rules permit an 11-hour shift through the night – and up to 12:45 hrs for a late-afternoon departure – with no breaks, but the need to be awake and alert throughout the flight. The study has now demonstrated that not only very long night flights (10 hours or more) but all night flights, irrespective of their duration, lead to an excessive level of crew fatigue.

These findings are particularly relevant for long-haul operations because, in practice, the length of night FTLs determines how many crew members will be on board for many long-haul trips that include a night duty in one direction or the other direction.

The second major source of fatigue, so-called ‘disruptive schedules’, affect mostly short-haul operations. Those are schedules of crew which start early in the morning (e.g. at 05:00) or finish late in the evening / during the night (e.g. 23:00-01:59). Handling consecutive blocks of such duties and the transition between them are routinely at the top of short-haul pilots’ concerns about fatigue and rosters. The study confirms that these duties severely disrupt the human body clock and its wake-sleep rhythm.

“Replacing the hours your body needs to be asleep with the task of piloting an airplane carries a very high fatigue risk,” says Capt. Jon Horne, ECA President. “This may be a surprise to some but is no surprise to the thousands of pilots who fly such schedules day in, day out. This study puts the spotlight on a well-known, well-researched and now operationally confirmed safety risk. This risk must be taken seriously to prompt an immediate review of Europe’s FTL rules.”

The study outcome confirms several previous scientific assessments, which recommended stricter FTL rules, e.g. limiting night flights (with unaugmented crew) to 10 hrs, and putting limits on the number of consecutive disruptive schedules (e.g. not more than 2 or 3 in a row). It also echoes recent surveys among European pilots. “Half of airline pilots report fatigue which could jeopardise passenger safety” warned the London School of Economics (LSE) in 2016. Its Safety Culture study highlighted that fatigue strikes 6 out of 10 European pilots, but that only 2 out of 10 pilots think that fatigue is taken seriously by their airline.

“The study confirms that it was wrong to let pilots and cabin crew fly for three years under conditions that have a strong and empirically proven impact on the crews’ alertness levels,” says Philip von Schöppenthau, ECA Secretary General. “The results of this study will hopefully come as a wake-up call for European and national aviation regulators, that you can’t beat the human body clock. The potential safety repercussions of heavily sleep disrupting night flights, early starts and late finishes are now clearly demonstrated. We count on the European Commission and the Agency to take their role as Europe’s safety regulators seriously and to act on the clear findings of this study without delay.”