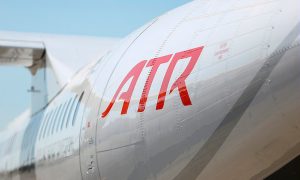 ATR and Stockholm-based Braathens Aviation has announced their agreement for the purchase of four additional ATR 72-600s.

Today’s announcement represents the conversion into firm orders of four options from a previous deal inked at the Paris Air Show in June 2015. On that occasion, ATR and Braathens Aviation had inked a deal for five firm ATR 72-600s and ten options. The aircraft will be operated by the group’s subsidiary airline Braathens Regional.

Braathens Aviation will progressively introduce its ATR ‘-600s’ fleet until the end of next year. The arrival of these nine brand new ATRs, configured with 72 seats and mainly operated in flights to and from the Stockholm-Bromma airport, responds to the aim of Braathens Aviation to upgrade and optimize its regional aircraft fleet. These new ATR 72-600s will partially replace aging Saab 2000s and, in a second step, ATR 72-500s, thus adding seat capacity and introducing the latest standards of comfort and navigation tools in its overall fleet.

The aircraft are also equipped with PW127M engines, which are certified to operate with biofuel, thus further enhancing the environmental-friendliness of the ATR ‘-600s’ and giving Braathens the opportunity to provide an even greener service to passengers.

“We are particularly pleased to bring into our fleet an aircraft which is reputed worldwide by its fuel-efficiency, environmental friendliness and ability to operate at small airports,” said Per G. Braathen, Chairman of Braathens Aviation. Providing our passengers with aircraft featuring the most modern standards of comfort is a substantial part of our fleet development. We are very satisfied with the outstanding levels of service and performance that the ATR aircraft have provided us for years, and we consider that the transition into the new ATR ‘-600s’ is a natural step in our fruitful partnership”.

Commenting on the deal Patrick de Castelbajac, ATR Chief Executive Officer, stated: “We are honored by this vote of confidence from an airline which is doing a unique job in connecting regional destinations in Northern Europe. Just like Braathens Aviation, ATR is fully committed to the preservation of the environment, and we are pleased to contribute to their growth with aircraft that have proven themselves as the green reference among regional aircraft”.

As of today, some 275 ATR aircraft fly over 25 European countries in the liveries of 60 airlines.