The new livery features the work of the late Northern Territory artist and senior Anmatyerre woman, Emily Kame Kngwarreye. It is based on her 1991 painting, Yam Dreaming and has been adapted for the aircraft by leading Indigenous owned design studio Balarinji.

The artwork depicts the culturally significant yam plant, an important symbol in Emily’s Dreaming stories and a staple food source in her home region of Utopia, 230km north-east of Alice Springs. The aircraft itself will be named Emily Kame Kngwarreye in tribute to the artist.

Qantas Group CEO Alan Joyce said the striking artwork is intended to encourage more people to explore the Indigenous elements that form part of ‘the Spirit of Australia’.

“As the national carrier we’re thrilled to showcase another piece of Indigenous culture on one of our aircraft, and to reiterate our ongoing commitment to reconciliation with Aboriginal and Torres Strait Islander people.

“It’s a beautiful, bold artwork and so we hope it catches people’s eye and sparks a conversation about our country’s dynamic Indigenous culture,” said Mr. Joyce. 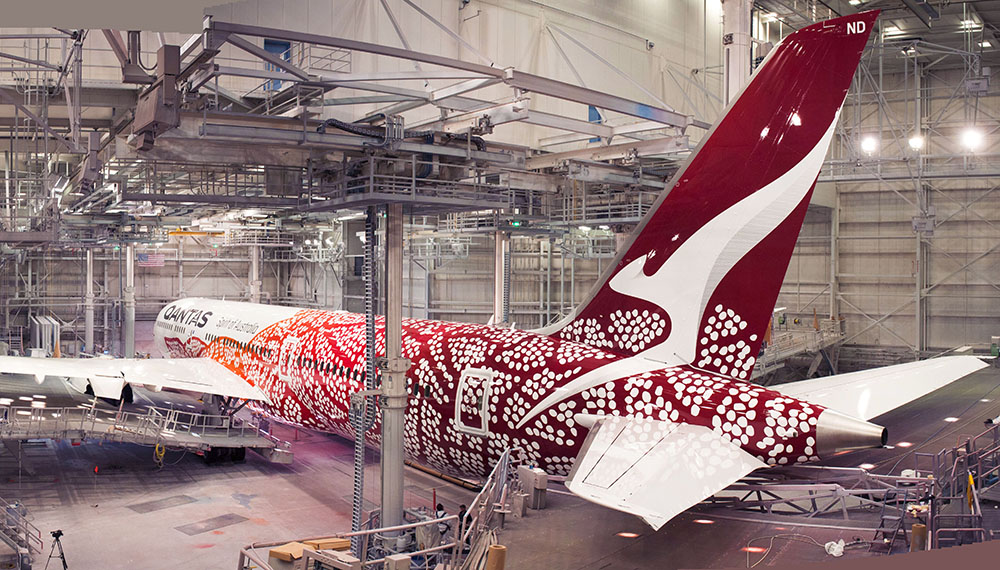 For only the second time in Qantas’ history the iconic flying kangaroo on the aircraft has been changed to form part of the design, with the airline’s trademark red tail colour altered to match the earthy red tones and white dots of Emily’s artwork.

Managing Director of Balarinji Ros Moriarty said the design studio was honoured to continue its 20-year partnership with Qantas to support the place of Aboriginal design in Australia’s global identity.

“It’s been a privilege to work with the brilliant imagery of the late Emily Kame Kngwarreye to create the airline’s fifth iconic Indigenous flying art aircraft. Emily was an extraordinary artist who is revered around the world.

“Born in 1910, she began painting only in later life, completing more than 3000 exceptional works up until her death at 86 years of age. Her work embodies her cultural and spiritual connections to her country,” said Ms. Moriarty.

The aircraft will fly direct for approximately 15 hours from the Boeing factory in Seattle to touch down in Alice Springs on 2 March 2018 where it will be welcomed by Emily’s family.

Registered as VH-ZND, the aircraft will then fly to Sydney and Melbourne for crew familiarisation flights on Qantas’ domestic network before it enters service on international routes from late March. This is the fourth Dreamliner to enter the Qantas fleet, following the arrival of Great Southern Land, Waltzing Matilda and Quokka.