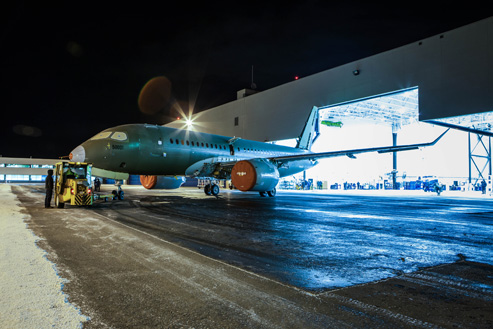 Bombardier Aerospace announced today that it has successfully completed the first full powering on of the main electrical distribution system on the first CSeries flight test vehicle (FTV1). Additionally, Bombardier confirmed that the wing down-bending static test was successfully concluded on the Complete Airframe Static Test (CAST) article at the company’s Saint-Laurent, Québec facility in late March 2013. Together with the wing up-bending static test that was completed earlier in March 2013, the two most significant wing

The company also confirmed that safety-of-flight tests are progressing well on “Aircraft 0” – the on-the-ground integrated systems test rig (ISTCR) for the CSeries aircraft.

“The powering on of the main electrical distribution system on FTV1 was one of the most exciting milestones so far in the CSeries aircraft development program and will now allow powering of all sub-systems and for the avionics suite testing,” said Rob Dewar, Vice President and General Manager, CSeries, Bombardier Commercial Aircraft. “As well, the last significant test on the CAST article − the down-bending test on the wing − was completed in late March, and we are thrilled with the analysis and feedback from the team, which allows progression to the next experimental phase. These are all important activities that will lead to the CSeries aircraft’s safety-of-flight permit.”

“The build of the flight test vehicles, the static airframe testing and the systems tests are all advancing to schedule. We are very satisfied with the CSeries aircraft’s excellent progress and weekly achievements as we advance solidly towards first flight,” added Mr. Dewar.