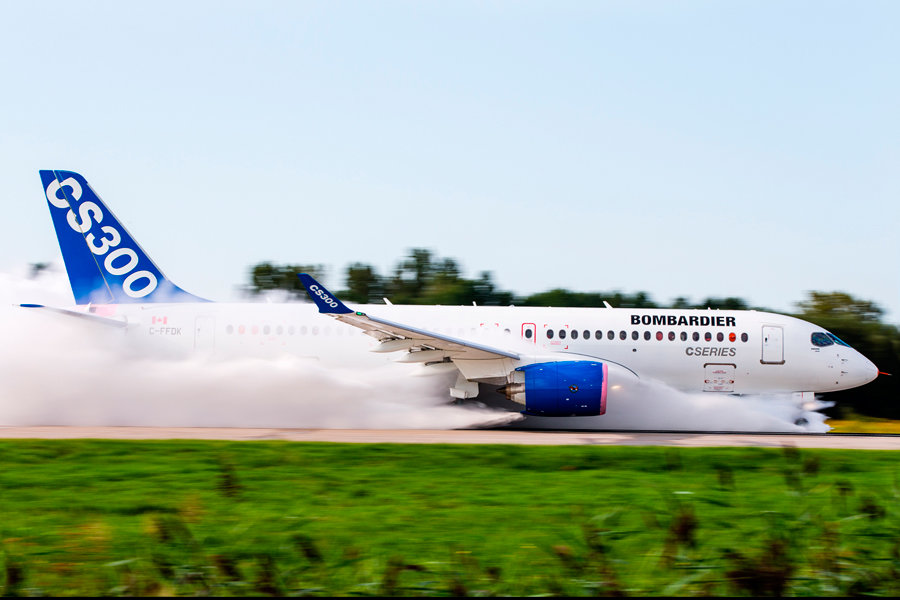 The visit is the debut of the C Series aircraft in China and the jetliner, which is showcasing the logo of CS300 first operator airBaltic, will be on static display at the China International Aviation & Aerospace Exhibition (Airshow China) from October 30 to November 3.

“As we approach first delivery and entry-into-service of the CS300 aircraft with launch operator airBaltic in the coming weeks, it is a pleasure to be showcasing the aircraft in China for the first time and updating the industry on our progress,” said Andy Solem, Vice President, Sales – China and North Asia, Bombardier Commercial Aircraft. “What we have been saying all along, is confirmed – the aircraft offers exceptional fuel burn and range, outstanding airfield performance in hot-and-high operations and it is the quietest commercial jet in production.

“The C Series aircraft, utilized in a regional role, is ideally suited to support the Chinese Government’s goals to make domestic air travel accessible to all Chinese citizens at low cost and in an environmentally efficient manner.”

Greater China alone is forecasted to take delivery of 1,150 aircraft in the 100- to 150-seat segment over the next 20 years. This represents more than 15 per cent of the world’s total demand for 7,000 aircraft in the segment.

The technologically advanced CS300 airliner, along with the Bombardier Global 5000 business aircraft, will be featured as part of the static display from October 30 to November 3. Guests will have the opportunity to witness and experience the aircraft first-hand. Bombardier’s booth, which is adjacent to the aircraft static display, is located at H4C3.

The C Series is the only aircraft optimized for the 100- to 150-seat market segment, which drives the aircraft’s phenomenal economic proposition and performance, opening up new opportunities for single-aisle aircraft operation.

Comprised of the CS100 and the larger CS300 aircraft, the C Series family represents the fusion of performance and technology. The result is aircraft that deliver unmatched performance and economics in the 100- to 150-seat market segment and an 18 per cent lower cost per passenger, making them the ideal candidates to complement larger single-aisle aircraft. Airlines can now operate routes that were previously not profitable or even possible. An improvement in range in excess of 20 per cent out of hot-and-high airports such as Denver, Mexico City or Lhasa has been confirmed.

Bombardier has created a new standard in cabin design and flexibility to ensure an unrivalled passenger experience. The aircraft’s larger seats, overhead bins and windows deliver a widebody feel that offers passengers unparalleled comfort in a single-aisle cabin.