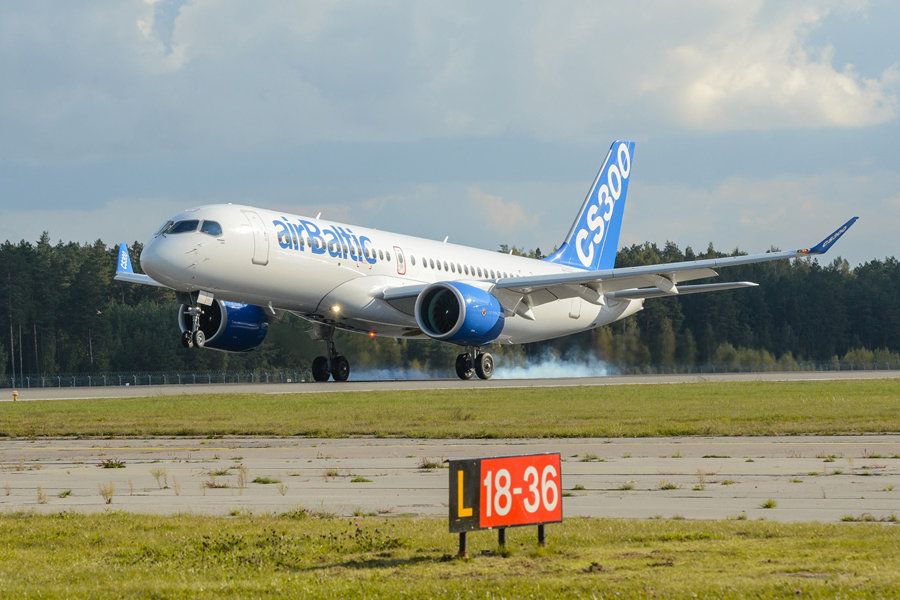 Bombardier announced that its CS300, the second flight test vehicle, has embarked on a series of European route-proving flights.

Bombardier announced today that its CS300, the second flight test vehicle, has embarked on a series of European route-proving flights alongside first operator airBaltic of Latvia.

The flights will be operated from the airline’s base in Riga to destinations in Eastern Europe such as Vilnius, Lithuania and Tallinn, Estonia, will use airBaltic air and ground operational practices.

Scheduled to take delivery of its first CS300 aircraft in the fourth quarter of 2016, airBaltic will join Bombardier on some of the routes as the first CS300 operator readies for its entry into service.

“It’s exciting for the airBaltic team to welcome the CS300 to its home base in Riga for the first time to see the aircraft simulate operations in our route system that covers much of Europe first-hand, in advance of our first delivery later this fall,” said Martin Gauss, Chief Executive Officer, airBaltic.

“The CS300 aircraft has outstanding performance, admirable efficiency and an impressive cabin that offers maximum comfort and we are looking forward to introducing this fine aircraft to our passengers and airports in our network.”

“Because of the 99 per cent commonality between the CS100 and CS300 aircraft and the diverse routes that award-winning airline airBaltic operates, we are expecting to see a perfect blend of performance, outstanding reliability and operational ground support,” said Rob Dewar, Vice President, C Series, Bombardier Commercial Aircraft.

“Our teams are working closely together as we ramp up activities for a real indication of how the CS300 will operate in the network and we are confident its entry-into-service with airBaltic later this year will be impressive.”

With a firm order for 20 CS300 airliners, which will eventually join airBaltic’s 12 Q400 turboprops, the airline will gradually transition to an all-Bombardier fleet.

The route-proving flights provide a very good indication of how the aircraft will perform in typical day-to-day airline operations by observing airfield performance, airport turnaround times and on-ground operations at various airports.