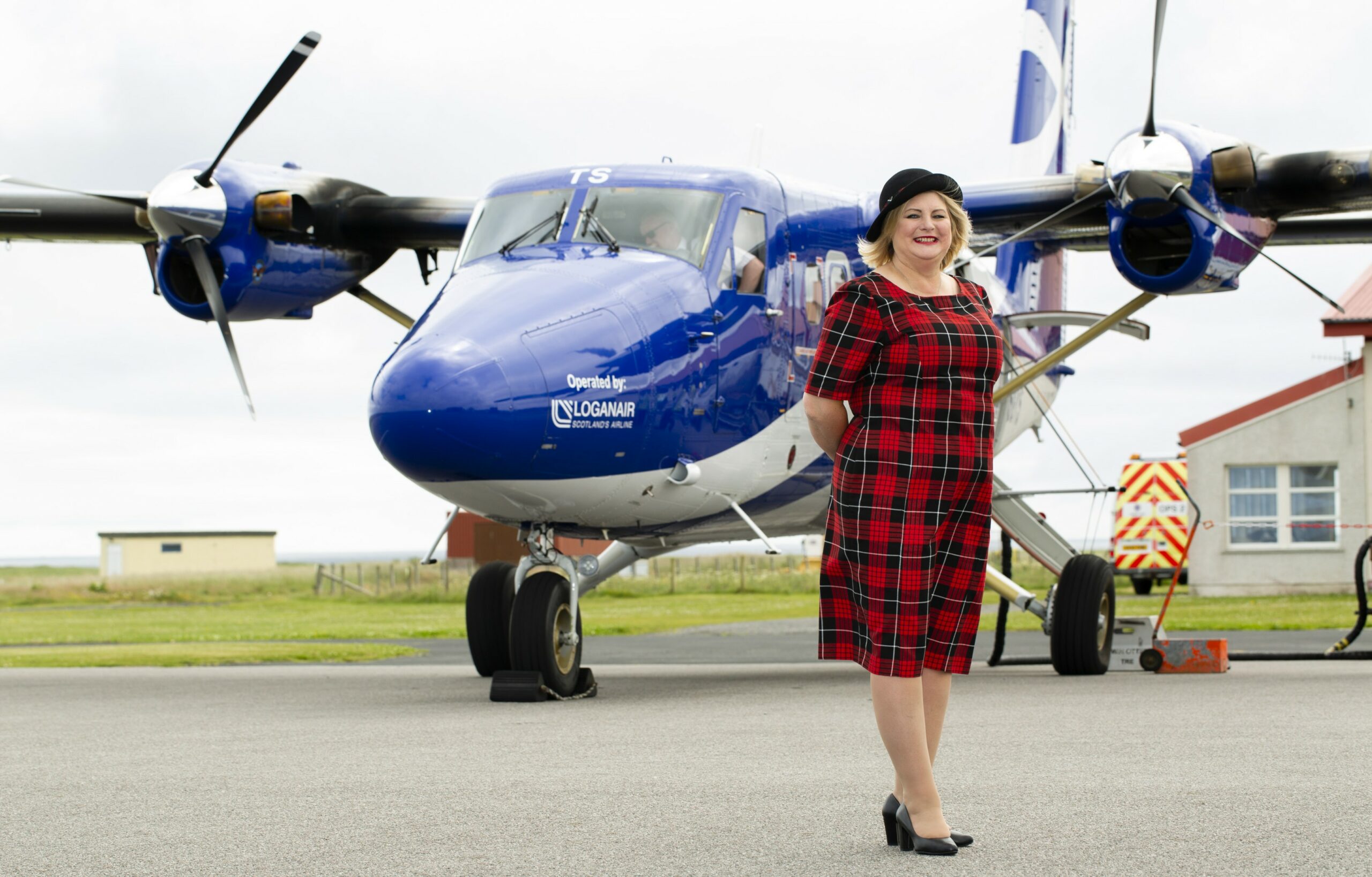 One of Loganair’s longest-serving employees has marked a ruby anniversary at the helm of the airline’s operation in the remote Scottish island of Tiree, one of the UK’s smallest commercial airports.

Ishbel MacKinnon, or Tish (57) as she is known locally, has been employed at Loganair’s station on the 12-mile-long Inner Hebridean island since July 1979 – when the airport served around 4000 passengers per annum. She eventually went on to take over from her late father, Archie MacArthur who headed up the airport between 1960 and 1990 as an employee of British Airways (then British European Airways) – which provided air routes to Glasgow and Barra.

Her first visit to the airport was quite early, days after being born in Glasgow and arriving back in Tiree by air with her mother and grandmother – still owning the original ticket written by Archie for the trip to Glasgow Airport.

Despite being a regular in her father’s workplace as a youngster, Tish’s official duties commenced when she stepped in as holiday cover for her dad during term breaks while completing a childcare course in Langside College, Glasgow.

The father and daughter duo shared duties for 11 years, with Archie famously working the morning of Tish’s wedding, deliberately timed to start in the afternoon, so she could get ready and he could meet the morning inbound flight – packed with wedding guests.

Loganair started serving Tiree in 1975 but locals still referred to the airfield as being operated by BEA – ‘Big Erchie’s Airline’- illustrating how important the family is to aviation in Tiree.

After his retirement in 1990 Tish was promoted to Senior Customer Services Manager, responsible for Loganair’s operation in Tiree – which last year welcomed around 12,000 passengers – less than 0.004% of the UK’s total air travellers.

Overseeing daily flights to and from Glasgow on a 19-seat Twin Otter aircraft, Tish heads up a team of three Loganair employees tasked with ensuring customers and their baggage are looked after safely and professionally – with daily duties including check-in, reservations, baggage handling and arrangements in the event of occasional weather disruption.

Tish said: “It’s a really rewarding job and the fact I’ve been in post for 40 years shows how much I enjoy it.  The air service is really important to residents of Tiree, used by locals going on holiday or to visit relatives, but also for trips to hospital, weddings, honeymoons and occasionally even funerals.

“One of my favourite perks is being the first person to meet new-born babies as they arrive back on the island after leaving hospital in Glasgow, which is actually the exact journey I took whenever I first arrived in the world and when I gave birth to my three children. I’ve also met lots of celebrities, politicians, nobility and musicians who visit Tiree throughout the year.

“Things have definitely changed quite a bit since I first started but Loganair ensures I’m fully trained in all the rules and regulations around aviation as well as the various technologies which are now essential to the role.

“With the number of customers passing through the airport increasing yearly – as Tiree’s popularity continues to grow amongst tourists, I look forward to welcoming visitors to the island for many years to come.”

Aviation definitely runs in the family, with Tish’s daughter Lynne Kerr previously working as Loganair cabin crew. Another member of the MacKinnon clan also looks set to step into the family trade as 5-year old grandson Aonghas has developed an early love for aviation – even asking for a Loganair uniform for his Christmas present.

Tish is married to husband, Angus MacKinnon, a local builder and together they have three children and two grandchildren.

“I’d like to extend a huge congratulations to Tish, from everyone at Loganair, for such an amazing service record with the company. Tish is the face of the airline in Tiree, often the first person to greet visitors from around the world while also supporting the local community with all of their travel plans. Her knowledge and passion for the job is fantastic and I can only thank Tish who is an integral part of the Loganair family.”