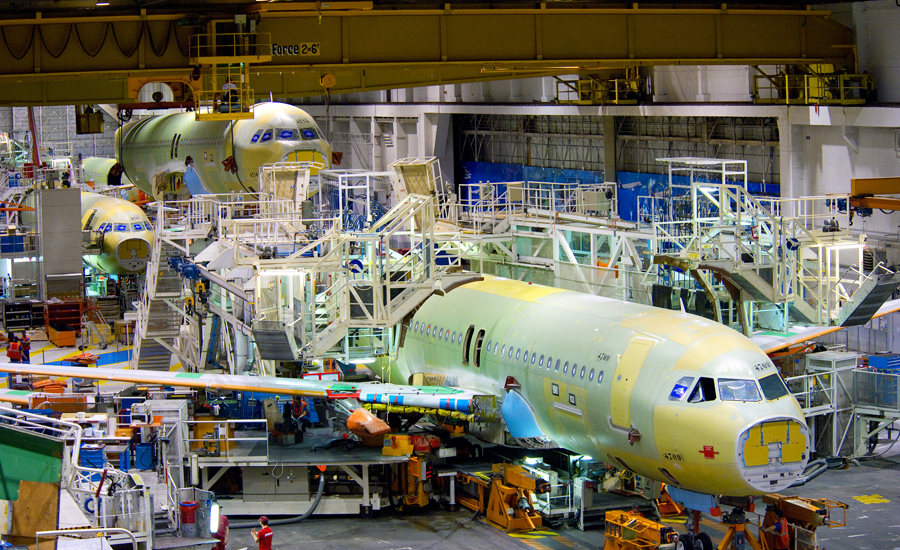 Airbus manufacturing in the United States advanced another step closer to reality today in Mobile, Alabama, as construction of the company’s A320 Family Assembly Line officially began.

During a groundbreaking ceremony at the Mobile Brookley Aeroplex, Airbus President and CEO Fabrice Brégier acknowledged the significance of the U.S. facility to Airbus’ global growth. “Building an A320 Family Assembly Line in Mobile is truly groundbreaking for Airbus. Our customers need more aircraft that cut fuel burn, emissions and operating costs. With this assembly line we will be able to meet our customers’ needs at their doorstep, in addition to the worldwide demand for these efficient aircraft. When this assembly line opens, we will be the only one to assemble aircraft in Asia, the Americas and Europe.”

The new assembly line, which is the company’s first U.S.-based production facility, will be located at the Mobile Brookley Aeroplex and will facilitate assembly of A319, A320 and A321 aircraft. Major construction of the facility will begin this summer. Aircraft assembly is planned to begin in 2015, with first delivery of a Mobile-assembled aircraft in 2016. At full production, the assembly line and associated facilities would produce up to four aircraft a month which directly translates into employing as many as 1,000 high-skilled workers.

EADS CEO Tom Enders helped lead the celebrations and welcomed more than 1,000 attendees including many EADS and other Airbus executives, state and national dignitaries, industry officials and the local community. In a twist from typical groundbreaking ceremonies, officials and dignitaries introduced various members of the Gulf Coast community and aviation industry who spoke about how the new assembly line is not just about making airplanes, but the substantial positive impact it will make in the lives of thousands of people like themselves. Local community representatives included: Henry Hinojosa, Project Superintendent with Hoar Program Management represented the local construction industry; Liz Freeman, co-owner of Long’s Human Resource Services represented local small businesses; Victoria Corob, an eighth grader in Mobile; and Dr. Keivan Deravi, Professor of Economics at Auburn University Montgomery. Industry speakers included Clay Jones, Chairman and CEO of Rockwell Collins and Dave Barger, President and CEO of JetBlue Airways.

Airbus is a leading aircraft manufacturer with the most modern and comprehensive family of airliners on the market, ranging in capacity from 100 to more than 500 seats. Airbus champions innovative technologies and offers some of the world’s most fuel efficient and quiet aircraft. Airbus has sold over 12,700 aircraft to more than 500 customers and operators worldwide. Airbus has achieved more than 7,700 deliveries since the first Airbus aircraft entered service.

Airbus already has a strong and growing presence in Alabama and throughout the United States.  In Alabama, the company operates an Engineering Center in Mobile – also located at Brookley Aeroplex – which employs more than 200 engineers and support staff. In addition, Airbus’ operates an even larger Engineering Center in Wichita, Kansas, an aircraft Spares Center in Ashburn, Virginia; a Training Center in Miami, Florida, and a regulatory and government liaison office in Washington, D.C. The company’s headquarters for the Americas is located in Herndon, Virginia.  Airbus’ U.S.-based air traffic management subsidiary, Metron Aviation, is located in Chantilly, Virginia.  All together, Airbus’ U.S. facilities employ more than 1,000 people.