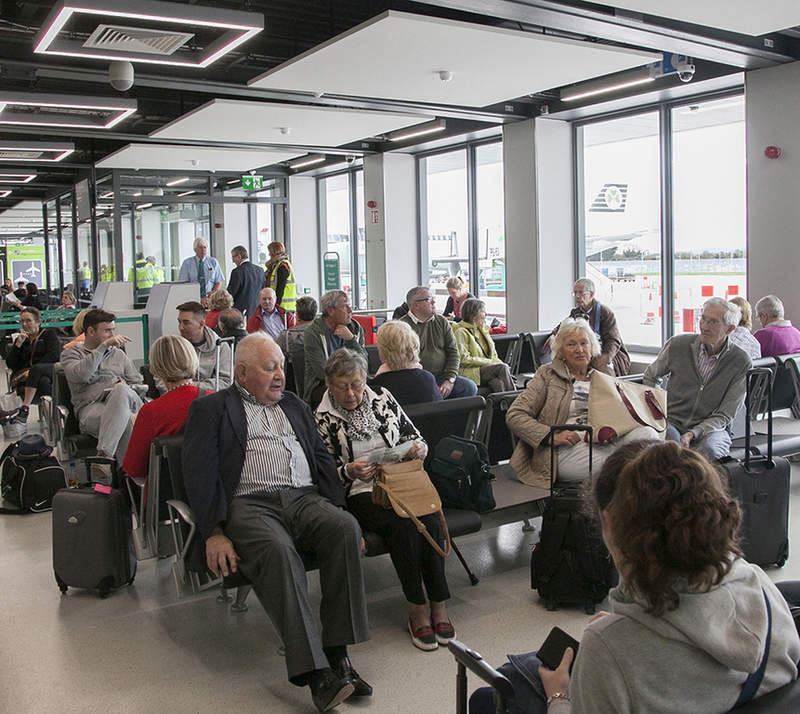 The new South Gates area, which will be used mainly by Aer Lingus for flights to the UK and continental Europe, has five boarding gates serving nine aircraft parking stands.

Passengers will walk out to the aircraft, allowing airlines a fast turnaround time for their operation. A shuttle bus service from an existing lounge at Gate 335 will operate every two minutes on a continuous loop bringing passengers to and from the new boarding gate facility.

“The huge growth that we have had in passenger numbers in recent years created significant demand for extra boarding gate space and aircraft parking stands and this new facility meets those requirements in a modern flexible way,” said Dublin Airport Managing Director Vincent Harrison.

“We have worked closely with our airline customers to deliver a quality new facility in a rapid timeframe,” he added.

The South Gates boarding area is part of a €100 million plus investment programme at Dublin Airport this year, as improvements are made to existing passenger and airfield areas and new facilities are delivered.

Other major investments include the total resurfacing of the main runway, an extension to the 100 boarding gate area, an upgrade to the 200 gates, and the refurbishment of Terminal 1’s Departures and Arrivals areas.

“As our passenger numbers grow we are constantly investing in our facilities to continue to deliver a quality experience for our passengers and airline customers,” according to Mr. Harrison.

Work on the new boarding gate area, which is located south of Terminal 2, started earlier this year. The 2,200 square meter facility was built offsite in 80 pieces and then transported to Dublin Airport for final assembly.

Shuttle buses will transport passengers to and from the new boarding gates. The new building can accommodate almost 1,000 passengers and includes a café, toilets, baby changing facilities and a workstation area with plugs and charging points.

Dublin Airport has welcomed a record 27.4 million passengers in the 11 months to the end of November, which is a 6% increase over the same period last year. The growth in passenger traffic is due to a combination of 14 new routes and extra capacity on 39 existing services.

An economic study published earlier this year found that in 2016, Dublin Airport supported and facilitated more than 117,300 jobs in the Republic of Ireland and contributed €8.3 billion to the Irish economy.

The 1.6 million increase in passenger numbers at Dublin Airport so far this year has created additional economic benefits throughout the country.