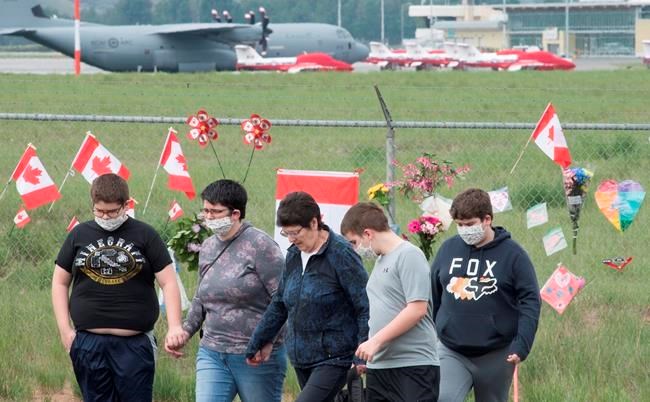 One member of the Canadian Armed Forces (CAF) was killed on Sunday, May 17, 2020, and one other member injured in an accident involving a Royal Canadian Air Force CT-114 Tutor aircraft in the vicinity of Kamloops, British Columbia.

Captain Richard MacDougall, one of the team’s coordinators and pilot of the aircraft, was injured and is being treated for his injuries.

The Canadian Forces Snowbirds were deployed on Operation INSPIRATION, a cross-Canada tour to lift the spirits of Canadians and salute front-line workers during the COVID-19 pandemic. At the time of the accident, the CF Snowbirds were taking off from the airport in Kamloops, British Columbia.

The CAF are providing our members and their families with as much support as possible to help them through this difficult time.

An RCAF Flight Safety team will depart from Ottawa shortly to investigate the circumstances of the accident and will begin their work immediately upon arrival.

“I was deeply saddened to learn of the loss of one of our Canadian Armed Forces members in a tragic incident involving one of our Snowbirds’ aircraft in Kamloops, British Columbia. I am sending my sincerest condolences to the family, friends and colleagues of Captain Jenn Casey. I am also wishing a rapid and complete recovery for Captain Richard MacDougall.

“Canadians look at the Snowbirds as a source of joy and an exhibition of the incredible feats that our people in uniform are capable of. Operation INSPIRATION was intended to lift the spirit of Canadians at this difficult time and the Snowbirds accomplished their mission. I know that all Canadians grieve this tragic loss.”

“Another tragedy has hit our Canadian Armed Forces. The Snowbirds’ Op INSPIRATION brought joy to Canadians across our country. Today, we come together in their time of need. To the family of Captain Jenn Casey we send our condolences, know that she was an inspiration to many and she will be missed. To Captain Richard MacDougall, we wish you a speedy recovery.”

“The whole Defence Team family is deeply saddened by the loss of Captain Jenn Casey. Deepest condolences to her loved ones, and to her colleagues in the Snowbirds, the RCAF and her fellow Public Affairs Officers. We also wish Captain Richard MacDougall a steady recovery through these most difficult of times.”

“Today, the RCAF has suffered another tragic loss of a dedicated member of the RCAF team. We grieve alongside Jenn’s family, friends and colleagues and are deeply saddened. Our thoughts also go out to the loved ones of Captain Richard MacDougall. We hope for a swift recovery from his injuries.”