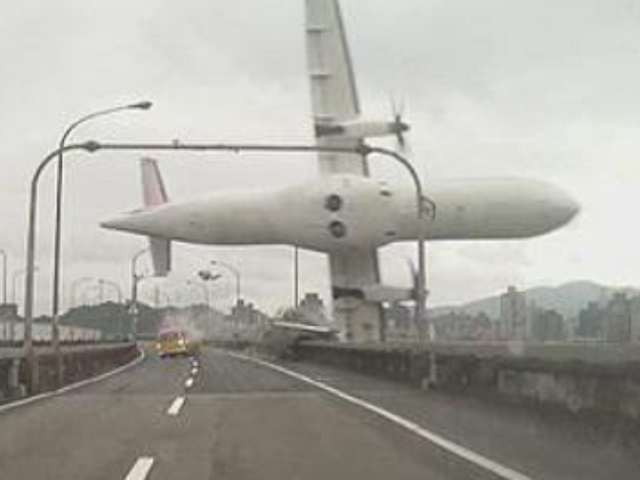 On February 4, 2015, about 1054 Taipei Local Time, TransAsia Airways (TNA) flight GE 235, an ATR-GIE Avions de Transport Régional ATR72-212A (ATR72-600) aircraft, registered B-22816, experienced a loss of control during initial climb and impacted Keelung River, three nautical miles east from its departing runway 10 of Taipei’s Songshan Airport. Forty-three occupants were fatally injured, including three flight crew, one cabin crew, and 39 passengers. The remaining 13 passengers and one cabin crew sustained serious injuries. One passenger received minor injuries. The aircraft was destroyed by impact forces. The aircraft’s left wing tip collided with a taxi on an overpass before the aircraft entered the river. The taxi driver sustained serious injuries and the only taxi passenger sustained minor injuries. Flight 235 was on an instrument flight rules (IFR) regular public transport service from Songshan to Kinmen.

The accident was the result of many contributing factors which culminated in a stall-induced loss of control. During the initial climb after takeoff, an intermittent discontinuity in engine number 2’s auto feather unit (AFU) may have caused the automatic take off power control system (ATPCS) sequence which resulted in the uncommanded autofeather of engine number 2 propellers. Following the uncommanded autofeather of engine number 2 propellers, the flight crew did not perform the documented abnormal and emergency procedures to identify the failure and implement the required corrective actions. This led the pilot flying (PF) to retard power of the operative engine number 1 and shut down it ultimately. The loss of thrust during the initial climb and inappropriate flight control inputs by the PF generated a series of stall warnings, including activation of the stick shaker and pusher. After the engine number 1 was shut down, the loss of power from both engines was not detected and corrected by the crew in time to restart engine number 1. The crew did not respond to the stall warnings in a timely and effective manner. The aircraft stalled and continued descent during the attempted engine restart. The remaining altitude and time to impact were not enough to successfully restart the engine and recover the aircraft.

Had the crew prioritized their actions to stabilize the aircraft flight path, correctly identify the propulsion system malfunction which was the engine number 2 loss of thrust and then take actions in accordance with procedure of engine number 2 flame out at take off, the occurrence could have been prevented. The investigation report identified a range of contributing and other safety factors relating to the engine’s auto feather unit, crew of the aircraft, TransAsia’s flight operations and management processes, and the regulatory oversight of TransAsia by the Civil Aeronautics Administration (CAA).

This investigation identified important learning opportunities for pilots, operators, regulatory agencies and aircraft manufacturer to improve future aviation safety and to seek to ensure such an accident never happens again. The Aviation Safety Council (ASC) has issued a series of safety recommendations to TransAsia Airways, CAA and aircraft/engine/component manufacturers to correct the serious safety deficiencies identified during the investigation. The manufacturers of aircraft, engine and auto feather unit have also implemented various safety actions in response to the occurrence.

TransAsia said in a statement it respects the report’s findings, and has taken steps since last year to improve safety and crew training.